I was sent this flyer today, for the San Francisco Fire Department’s Neighborhood Emergency Response Training being held at UCSF at Parnassus.  It’s for July 10 AND 17th – anyone can attend, but they have to attend both sessions. Here’s the flyer (clicking on it will yield a larger version): 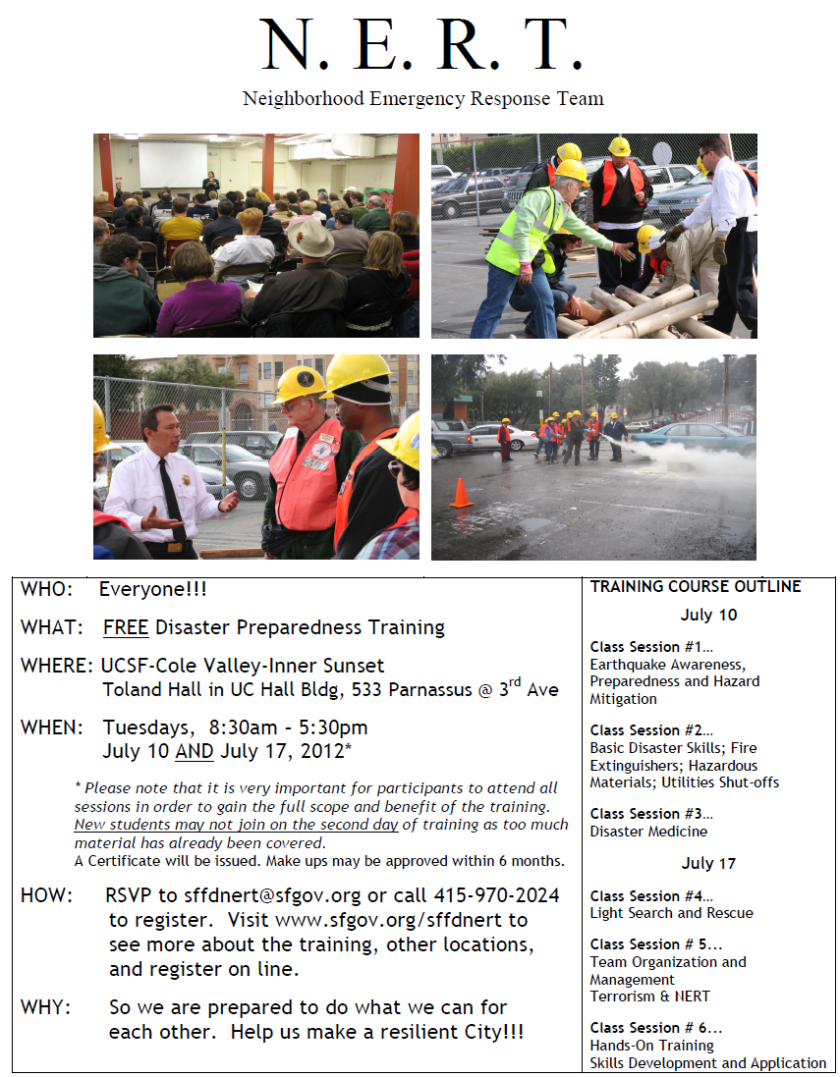 We went to West Portal last evening with a couple of simple errands that would take us to St Francis Market or Eezy Freezy and Walgreens. When we got there, we found several fire-trucks, lights flashing, on the first block near the Chase Bank branch.

There was no sign of fire or smoke, but there were half a dozen emergency response vehicles out there, and fire-crew. Someone came out of the Chase branch, talked to them, went back in. 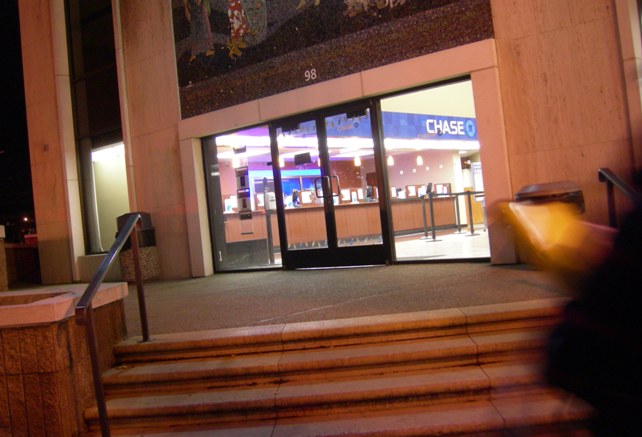 It looked quite normal. Soon, he came out accompanied by another person, probably another bank employee. Meanwhile, the crew had placed a ladder against the other side of the building, between Bookshop West Portal and the Chase building.

I asked the bank person what happened. “Someone smelled something,” he said. “Something burning. We called 911 just to be careful. They have it all under control now.”

We left to do our errands, with a small detour via the Bookshop. (It’s difficult to avoid small detours via bookstores.) I headed for St Francis Market.

That’s when the lights went out. The whole of the first block went dark.

“It’s like the beginning of a mystery story,” my companion said. “When the lights come back on, there’s a corpse.”

“There’s an author who writes West Portal mysteries,” I said. “Maybe she could use this.”

It looked like the rest of the street had lights, so we went on to Walgreens, in the middle of the second block. Despite the fact that stores on either side had power, Walgreens was dark. Curiouser and curiouser.

Over coffee (and a gingerbread man) at West Portal Bakery, we decided to go to the Safeway at Taraval. It turned out that several blocks of homes were also powerless. But from about 14th avenue and Taraval, the lights returned.

We couldn’t figure out whether the power loss was incidental to whatever brought the firetrucks, or if it was part of the same problem. We couldn’t understand the pattern of power failure, either: Why Walgreens and Safeway, both standing amid buildings that apparently had normal power?

If it were a novel, this would be the Coincidence that was Not a Coincidence.

In the event, nothing happened. A couple of hours later, we drove through again. The lights were back on. I presume there was no corpse.

Edited to Add: The story has an interesting coda. Since Bookshop West Portal was in darkness after our failed errand, we went to Borders at Stonestown. We bought one or two books (or it might have been three or four), then went home.

This morning, my email in-box had a message from Bruce Black (not someone I know) headed “Your wallet.” Someone had turned in my wallet that I’d apparently dropped or abandoned at Borders.

They tracked me down by my Borders membership card.  I got my wallet back intact, and they wouldn’t accept a reward.

Thanks, Bruce (and whoever turned it in). You’re terrific. 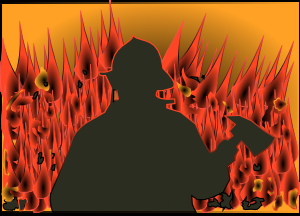 This was in the Park Station Police newsletter, and was looking for a signal boost. It’s of interest to all of us, living as we do in earthquake country. The SF Fire Department is offering classes in January through early March 2011. Most of them are six-session evening courses; but they also offer a couple of intensive weekend options. The classes are held all over the city. The one closest to our neighborhood is probably in the Sunset, at 5th and Irving. According to the newsletter, more classes will be added later on.

Hello,
My name is Erica and I am the current program coordinator for NERT, the Neighborhood Emergency Response Team.  This program provides instructor-lead classroom training with hands-on components included to prepare San Franciscans for a disaster no matter how big or small.

Earthquake? Power Outage? Flooding on Shotwell Street?  This all hazards approach begins with caring for oneself and family and includes training to become a volunteer emergency responder in your neighborhood.

I am writing to request your assistance to get the word out about this free training opportunity.  We do not have an advertising budget and rely on word of mouth to spread this important information.  We are now celebrating over 20 years of consistent emergency response team training and I still often meet people who are not aware of this opportunity.

New NERT classes are coming up and people should take the training that best fits their schedule.  People can join their neighborhood team upon completion of the training.  Participants should plan to attend all sessions of the training to gain the full scope and benefit.  New students may begin no later than the 2nd week of a six week class and must begin on the 1st day of a two-day intensive class.

There is also a three hour introductory workshop that focuses on personal preparedness.

Thank you in advance for any assistance you can provide in telling people about NERT training.

Seven new classes are beginning in the new year. More will be added through the spring.  Check back to the website if the scheduling does not fit your needs. Click the link or type in the following URL: http://www.sf-fire.org/index.aspx?page=859

Resilient Community Workshop
SFFD NERT and SF SAFE  (sfsafe.org) want you to have skills to be  prepared for emergencies big or small, and know your neighbors to maximize resiliency after disaster.

This is being circulated in another Group. It’s reproduced here in case anyone wants to go.

Come join your neighbors for a FREE TRAINING FOR DISASTER PREPAREDNESS

Offered by SF SAFE and the San Francisco Fire Department’s 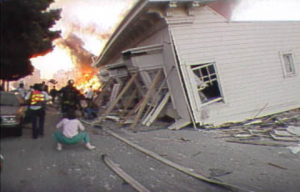 WHO: For everyone – bring your friends, family and neighbors!

This workshop will cover what everyone should know to prepare personally, as a business and as a community for a disaster, large or small.
Topics Include:

And about SF SAFE and Neighborhood Watch, visit www.sfsafe.org

WHY: For your safety in times of emergency, it matters what you do today!

We encourage participation from people with disabilities and seniors.  The location is wheelchair accessible, and Assisted Listening Devices will be available by request.  For real-time captioning, sign language interpretation, or any other accommodation, please contact Erica Arteseros at ph: 415-970-2022 email: sffdnert@sfgov.org.