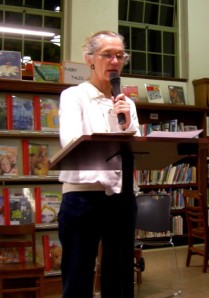 Okay, I love our library.

Our local library at West Portal isn’t just books. This evening, it put on a show : Singer Riffat Sultana and her husband Richard Michos,  and talks from four local authors

I was surprised that an event of this quality was free. Later, Librarian Melissa Riley told me it was funded with a grant from the Friends of the Library. Melissa made it intensely local by inviting participants actually connected to West Portal or to the library, using it for writing or research.

California State Assemblywoman Fiona Ma was there, showing her support.

This library is one of the charms of our area. It’s in a pretty building, sensitively remodeled in 2007 to be accessible to people with disability, and managed by friendly and helpful librarians. Events like this are a bonus. I was fascinated by the local focus: Who knew so many authors, not to mention musicians, were from around here? 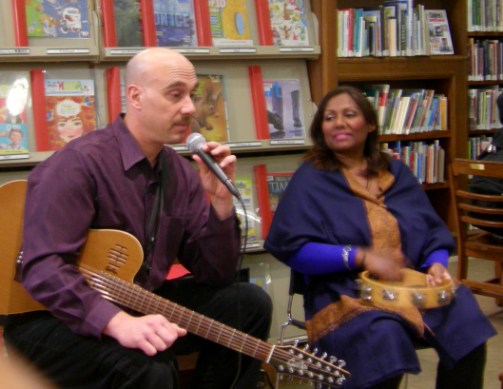 In the first half,  Riffat Sultana sang songs from Pakistan and India, all  in Urdu, Punjabi and Hindi. (These are all related but not identical languages of the Indian subcontinent.)

She’s a world-class talent, originally Pakistani, from a 500-year old lineage of classical singers.  Her husband, Richard Michos, who works at The Music Store in West Portal and teaches guitar, accompanied her.

Several of her songs were from the Islamic Sufi tradition, love-songs to God: You are my heart, you are my life, you are everything… She also performed a bhajan — Hindu devotional music — with the refrain God is truth, truth is Shiva, Shiva is beauty. Then she sang a “ghazal” (a poem set to music), in which a young woman laments a lover who doesn’t show up.

Later, I read her biography on her website. It’s a fascinating story of a born performer who started life in a conservative Muslim musical household where girls weren’t allowed onstage, and ended up performing with her own group and releasing her own records.

FROM HISTORY TO MYSTERY

The second part of the evening was devoted to authors.  It started with Gerald Nachman. Looking the quintessential author in corduroy and fair-isle and round-lensed glasses, he read a speech about how his career all started in libraries.

Later I looked it up: He’s been a humor columnist for the New York Post, and theater critic for the San Francisco Chronicle amongst other equally illustrious things.  He writes about the golden age of radio and TV;  his latest book is Right Here on Our Stage Tonight about the Ed Sullivan Show. “How TV’s most inept emcee created America’s most powerful popular variety show…” says his website.

Henry Conserva, the next author,  formerly taught school at Lowell High. As befits a teacher, he was an interesting and relaxed speaker. Together with his friend photographer John Weir, he was involved in the Sunset magazine’s book, The California Missions. First published in 1963, it’s still in print. Since then he’s written a whole bunch of books, many for school children, on topics from Physical Geography to the Constitution to Propaganda.

Author Diana Orgain, whose Mystery books are published by Penguin, was inspired by motherhood. She didn’t want to go back to work in a corporate setting; she wanted to hang out with her baby. She wrote the Maternal Instinct mysteries, about a first-time mother who is a Private Investigator. Bundle of Trouble came out last year, Motherhood is Murder in March 2010, and Formula for Murder comes out next March. Diana’s a really local author; she lives on Ulloa. The books sound like fun, and I’m a sucker for mysteries.

The final author for the evening was Mary F. Burns, who headed the West Portal Neighborhood Association and authored “The Woman Who Wrote the Bible” about Janaia, a daughter of King David. But what she spoke of  was her two earlier books, “cozy” mysteries actually set in West Portal (and subtitled A West Portal Mystery). The first, inspired by her friend’s bulldogs, is called the The Lucky Dog Lottery. The second is The Tarot Card Murders. Featuring such familiar places as St Francis Market and the Village Grill, they’re self-published and available from Ex Libris. And from our local West Portal library.

I left the library with an armful of books from each of the authors,  looking forward to some good reading ahead. (Unfortunately, I’ve promptly lost one of them, probably at St Francis Market or Eezy Freezy. I hope someone returns it to the library so I can check it out again!)

ETA: Melissa told me I’d left the “lost” book at the library.