We went to West Portal last evening with a couple of simple errands that would take us to St Francis Market or Eezy Freezy and Walgreens. When we got there, we found several fire-trucks, lights flashing, on the first block near the Chase Bank branch.

There was no sign of fire or smoke, but there were half a dozen emergency response vehicles out there, and fire-crew. Someone came out of the Chase branch, talked to them, went back in.

It looked quite normal. Soon, he came out accompanied by another person, probably another bank employee. Meanwhile, the crew had placed a ladder against the other side of the building, between Bookshop West Portal and the Chase building. 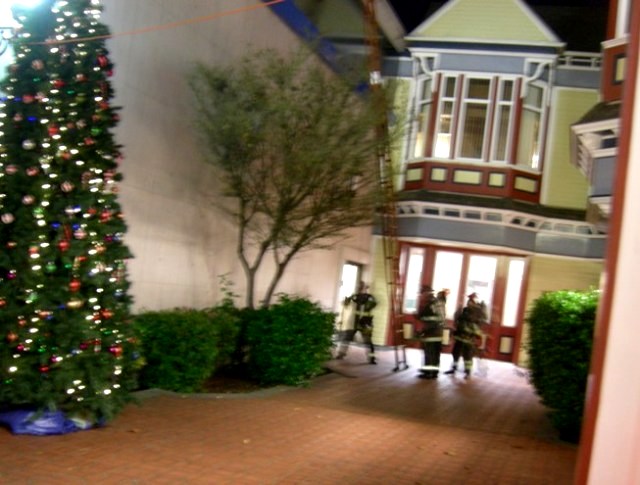 I asked the bank person what happened. “Someone smelled something,” he said. “Something burning. We called 911 just to be careful. They have it all under control now.”

We left to do our errands, with a small detour via the Bookshop. (It’s difficult to avoid small detours via bookstores.) I headed for St Francis Market.

That’s when the lights went out. The whole of the first block went dark.

“It’s like the beginning of a mystery story,” my companion said. “When the lights come back on, there’s a corpse.”

“There’s an author who writes West Portal mysteries,” I said. “Maybe she could use this.”

It looked like the rest of the street had lights, so we went on to Walgreens, in the middle of the second block. Despite the fact that stores on either side had power, Walgreens was dark. Curiouser and curiouser.

Over coffee (and a gingerbread man) at West Portal Bakery, we decided to go to the Safeway at Taraval. It turned out that several blocks of homes were also powerless. But from about 14th avenue and Taraval, the lights returned.

We couldn’t figure out whether the power loss was incidental to whatever brought the firetrucks, or if it was part of the same problem. We couldn’t understand the pattern of power failure, either: Why Walgreens and Safeway, both standing amid buildings that apparently had normal power?

If it were a novel, this would be the Coincidence that was Not a Coincidence.

In the event, nothing happened. A couple of hours later, we drove through again. The lights were back on. I presume there was no corpse.

Edited to Add: The story has an interesting coda. Since Bookshop West Portal was in darkness after our failed errand, we went to Borders at Stonestown. We bought one or two books (or it might have been three or four), then went home.

This morning, my email in-box had a message from Bruce Black (not someone I know) headed “Your wallet.” Someone had turned in my wallet that I’d apparently dropped or abandoned at Borders.

They tracked me down by my Borders membership card.  I got my wallet back intact, and they wouldn’t accept a reward.

Thanks, Bruce (and whoever turned it in). You’re terrific.

One thought on “West Portal Mystery”