It all started with a question on the Forest Knolls Yahoo Group about the brightly-colored paint-spots above the drain covers in our neighborhood. What were they?

Donna Chong responded. “Ever since the threat of West Nile Virus, San Francisco has been putting something in the sewers to keep the mosquitos from multiplying. The program has been going on for about 2 years. The paint indicates that these sewers have been treated and a new color spray is applied after each treatment. I am not sure how often they are treated but it is pretty frequent.”

Later, she added: “I personally am very glad they have the program. Our house borders a long drain and several catch basins that were a breeding ground for mosquitos. There were so many that we slept every night with a mosquito net!”

Someone else expressed a concern about dragonflies, wondering if they might be affected as well as the mosquitoes.

There was a sign on the pumphouse, she said, that indicated the treatment they were using, and we promised to check it out. Here it is: 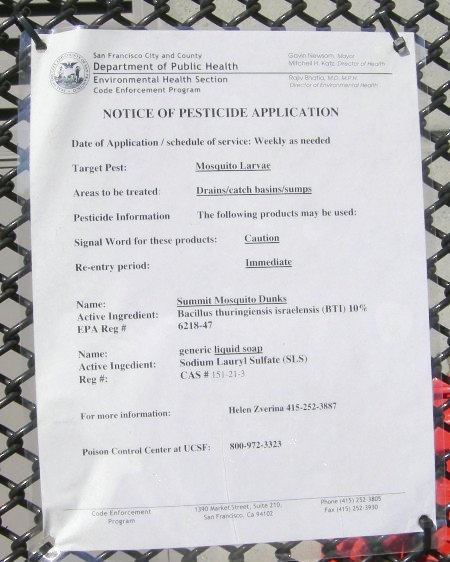 They use Bt (a bacillus that kills mosquitoes) and liquid soap, up to once a week. (Another source said once a month, from late spring through fall, but that was in 2005 and they may have changed the regime.)

Bt dunks are what pond-owners are advised to put in their ponds to prevent mozzies from breeding there. As pesticides go, it’s pretty mild because it’s a bacillus and not a chemical. It’s more eco-friendly than the larvicides that some other cities use.

Can it affect dragonflies? We’re guessing that unlike mosquitoes, dragonflies don’t breed in the catch basins. They’re supposed to like lakes with vegetation, even garden ponds (some kinds prefer streams). One site we checked specifically recommended Bt Mosquito Dunks in garden ponds because it doesn’t harm dragonflies. So they may not be directly affected.

On the other hand, dragonflies eat mozzies, and if there aren’t any, they might not be doing as well. Also, there’s a possibility that some kind of herbicide or pesticide is getting in the places they do breed. Maybe Laguna Honda lake? It’s a possible site near our neighborhood.