Recently, Wildcare – a wild animal rehab organization – published a warning. It’s nesting season and they ask everyone to RESPECT the NEST. It’s republished here with permission. 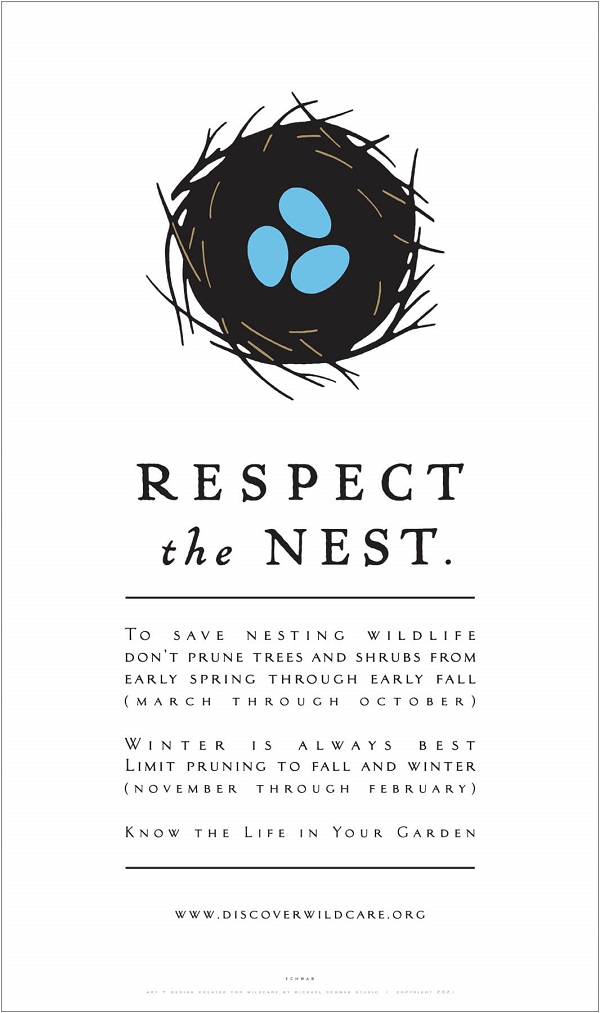 Respect the Nest by Michael Schwab

With the help of nationally-acclaimed artist Michael Schwab, WildCare asks you to Respect the Nest this spring and summer! Learn more!

It’s almost springtime in the Bay Area, and even as you read this [post] , birds, squirrels and other animals are nesting and preparing for their newborn and newly-hatched babies in your trees, shrubs and hedges.

WildCare has already admitted our first tiny, pink baby squirrels of the year!

Our Wildlife Hospital admits hundreds of injured and orphaned baby animals every spring and summer, many of them victims of tree-trimming and pruning accidents.

Michael Schwab created the Respect the Nest graphic to help us remind everyone to delay non-emergency tree-trimming and pruning until winter to avoid orphaning baby animals!

How can YOU Respect the Nest? Click to learn how to spot nesting activity and protect the wildlife in your yard.

Then join us for a free, informative Respect the Nest webinar presentation on Tuesday, March 9 [2021] at 6pm!

Attendees will learn:
– What animals may be using your trees and shrubs as a nursery… even as you read this!

– How to tell if there are active nests in your yard.

– What to do if you inadvertently cut down a nest or if you find an
injured animal.

– When it’s safe (and better for your trees) to prune and trim.

– How WildCare cares for baby animals orphaned by tree trimming.

Many people don’t know that timing our tree and shrub pruning is just one simple way we can minimize harm to wildlife.

Please Respect the Nest this spring and summer and help prevent baby animals from becoming orphaned.

I guess by now, most people in Forest Knolls have some idea that big changes are planned for the forest behind our neighborhood. Essentially, UCSF plans to cut down over 90% of the trees on three-fourths of the forest, and remove 90% of the undergrowth. The only bit to be spared would be 15 acres or so of steep hillside on the western side, above Inner Sunset.

UCSF is having a hearing on Feb 25th at 7 p.m. (They sent around postcards about this.) It’s at the Milberry Union, 500 Parnassus, CA 94134. If you can attend, please do, and speak up. If there’s a big turnout, they may limit each speaker to 2-3 minutes, so have your points ready. 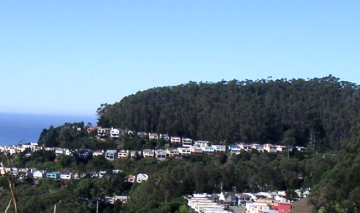 We’re concerned that it would ruin the forest’s character, and Forest Knolls would face consequences like:

The implementation would be in two phases; it would start with the “demonstration” plots, around 7.5 acres in Phase I. The largest of these, #1 in the map is a 3-acre strip directly above Forest Knolls. Most of the trees would be cut, and tarping or pesticides used to prevent resprouting. Later, UCSF would extend the same plan to the entire forest (except for the 15 acre piece mentioned).

WHAT ELSE YOU CAN DO:

1. Write to the Board of Regents, who will ultimately decide whether to approve this project. Ask them why they are undertaking this controversial, expensive, and ecologically destructive project, and gutting a San Francisco treasure to achieve a “parklike” environment. You can contact the Regents at their website HERE. (Their email address is: regentsoffice@ucop.edu )

2. Write a comment on the Draft Environmental Impact Report. The report is HERE. (It will take some time to load.) The person to write to is Diane Wong, and her email address is at: EIR@planning.ucsf.edu

3. Sign a petition to ask the Regents not to approve this plan. (And see how many signatures we have already!)

The article below has been copied with some modifications from http://www.SaveSutro.com, which is a website set up to inform people about Mount Sutro Cloud Forest and to defend it.

Mount Sutro Forest has approximately 45,000 trees in the 61 acres belonging to University of California, San Francisco (UCSF), and designated as an open space reserve. This dense forest, with an estimated 740 trees per acre, a sub-canopy of acacia, an understory of blackberry and nearly a hundred other plant species, is functionally a cloud forest. All summer long, it gets its moisture from the fog, and the dense greenery holds it in. Where it isn’t disturbed, it’s a lush beautiful forest, providing habitat for birds and animals, and a wonderful sense of seclusion from urban sounds and sights.

(CLICK HERE to see the Google Map of the forest.)

UCSF now has published a Draft Environmental Impact Report (DEIR) on a project to remove over 90% of the trees on three-quarters of the area. Only 15 acres – on the steep western edge of the forest – will remain as they are. Tree-felling could start as early as Fall 2013.

Here is the PDF of the DEIR. Mount_Sutro_EIR_1-16-13_with_Appendices

Comments were due on March 4th, but because of the length and complexity of the document, neighbors asked for, and got, an extension. Comments are now due before March 19, 2013.]

On most of the forest (44 acres), UCSF plans to cut down trees to achieve a spacing of 30 feet between trees – the width of a small road – and mow down nearly all the understory habitat. On another 2 acres, they will space the trees 60 feet apart. The stumps of the trees will be covered in black plastic, or else poisoned with Garlon to prevent re-sprouting. Eventually, this will kill the roots, which will start to decay. We’ll address some of these issues in more detail in later posts.

(The easiest way to think about it is that each tree occupies a 30 x 30 foot space, or 900 sq ft. An acre is 43,560 sq ft, so this would give 48.4 trees to an acre. The DEIR calculates it as 61 trees per acre, assuming each tree occupies a circle that’s 30 feet in diameter, 707 sq ft. But there’s no way to arrange circles without wasted spaces between them, so this doesn’t exactly work.)

That means that in the 46 acres where UCSF will be felling trees, they will remove more than 90% of the standing trees.

The DEIR says that they will start by cutting down trees that are dead or dying. Aside from their value as habitat (some birds like woodpeckers depend on them), there are not all that many of them in Sutro Forest, which despite everything that has been claimed to to opposite, is a thriving forest. Next in line will be trees with diameters under 12 inches, or roughly 3 feet around – as thick as an adult’s waist. Then they’ll start on the larger trees. Since it’s going to be 90% of the trees, we expect thousands of large trees to be removed.

However, this is not all. We expect further tree losses for four reasons:

What remains will be a seriously weakened forest with a greater risk of failure and tree-loss, not the healthier forest that the DEIR claims. It is likely that the long-term impact of the Project will be the elimination of the forest altogether, and instead will be something like Tank Hill or Twin Peaks plus a few trees.

The project is to be implemented in two phases. In the first phase, trees will be felled and the understory removed in four “demonstration areas” totaling 7.5 acres. They are shown on the map below in yellow, as areas #1-#4. [The 3-acre area #1 is right above Forest Knolls.]  One of these, #4 “East Bowl”, is the two-acre area slated to have only 12-15 trees per acre.

One area (#5 on the map) is supposed to be a “hands off” area to demonstrate the untouched forest. However, a trail has already been punched through it in November 2011, even before the DEIR had been published.

In the Second Phase, the plan would be extended to the remaining forest, with the proviso that not more than a quarter of the forest would be “thinned” at “any given time.”