We’ve been following the much-disputed San Francisco Overlook project for some years now. 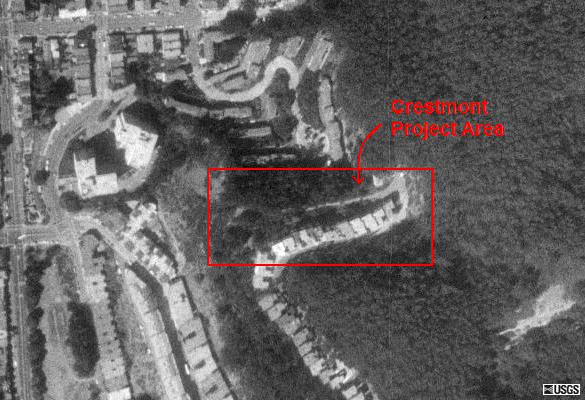 This is the planned development at the end of narrow, twisting, Crestmont Drive and was earlier called the Crestmont Hills project.

San Francisco’s Planning Commission approved it in 2013, and we reported on that HERE. Soon afterward, the developers reached an agreement with the Mt Sutro Woods Home Owners’  Association to reduce the number of units from 34 to 29, and reduce the heights of the buildings. An April 2015 report on the real estate website, SocketSite.com, reported that the project was able to proceed.

But it didn’t proceed. Instead, it was put up for sale.

Hmm. According to a November 2016 mailing I received from realtor John Kirkpatrick, homes in the Forest Knolls neighborhood sold for an average of $1.195 million. Forest Knolls homes have 2 or 3 bedrooms and 1 or 2 bathrooms, but the back half of the garage typically offers customizable space. You can put in another 2 rooms and bathroom down there if you want. They’re standalone homes with no shared walls and most of them have a yard. That’s the competition to this project.

Let’s say these 29 luxury homes are priced at about $1.5 million, because they’ll have the latest fit and finish. Other benefits, like a 2-car garage and views are not unique to the development.

That would be a gross take of $43.5 mn, roughly 3 times the asking cost of the land and plans. Is it worth it? I don’t know.

Though there’s an agreement with the Mt Sutro Woods HOA, the project’s  only access runs through the very narrow Crestmont Drive, which has houses on one side and a steep hillside on the other. Though on the map it looks like you could easily link it up to 5th Avenue, the intervening land doesn’t belong to the developer and is also very steep.

The way in to these 29 would-be homes is through the Forest Knolls neighborhood. Fears of destabilizing the mountainside where many homes are supported by concrete piers, fears of added traffic on an already narrow street, fears of potential emergency situations with very poor access, all could fuel more opposition.