I’ve written here about the Hidden Garden tiled staircase that was completed some months ago. Before that, there was the first of its kind in San Francisco, the magnificent 16th Avenue Tiled steps, which was completed in 2005. Recently I learned, (on Facebook!) that San Francisco has a third mosaic stairway. Unlike the other two, which are quite close to our neighborhood, this is over at Innes Street, in the Bayview at Innes and Northridge.

Tony Holiday, who hikes around San Francisco and blogs at Stairways Are Heaven,  attended the opening ceremony. This account below is a summary from his blog post, New Tiled Stairway. (Go there for more – and higher-resolution – pictures of this and other walks. His account of Forest Knolls stairways is HERE.)

There’s a new tiled stairway in San Francisco’s Bayview/Hunters Point neighborhood called “Flights of Fancy.” Learned about it from the Hidden Garden Steps Website (16th Ave. tiled stairway in the Golden Gate Heights neighborhood, Inner Sunset) where there are some photos. There’s some interesting info about this latest stairway art project on SF Department of Public Work’s page.

San Francisco’s third tiled stairway is named for Dr. Arelious Walker, a pastor and author who’s known for many good deeds in the Bayview community. I quote from an Internet article:

“One of the most distinguished honors a city can pay tribute to its greatest contributors is naming a street in their honor. Usually when that happens the person is deceased but in this case an exception was made and the great city of San Francisco named in his honor the street “Arelious Walker Drive” in the BayView Hunters Point and New BayView Districts. Dr. Walker is a Community Champion. His ultimate dream is to build TRUE HOPE SQUARE, a housing development with a senior citizens home, child daycare center, and a special home for those men and women that do not have any place to go when they get saved. Dr. Walker is constantly fighting to clean up the neighborhoods, keep affordable housing in every neighborhood, and to keep his dream alive so that it may come to fruition.” 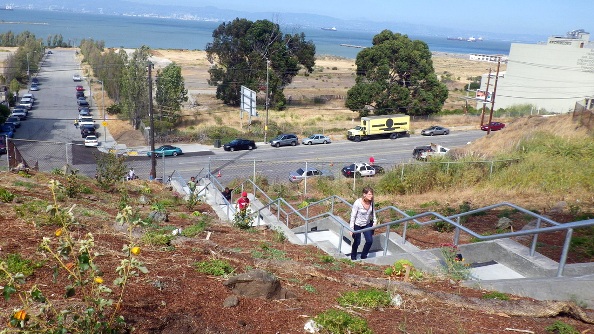 During a Bayview “Sunday Streets” a few years ago I had a great time exploring some of the neighborhood’s stairways and Hilltop Park (with the big sundial) but had not gone quite as far east as is the new stairway. I’d heard of Innes St. in the Bayview as it runs off Third St. and is on the T-Third Metro line, so I looked up Innes on Google Maps to see if it runs through to Arelious Walker where the stairway is; it does not. At Innes near Hudson, this seemed a rather long walk from the T-Third. I was, however, able to attend the opening celebration with a friend who has a car. There’s a very nice city-and-bay-view from the top of the stairs  and plenty of other stairways in the neighborhood that snake up to and around the residences. This area is near India Basin Shoreline Park.

While here, however, I noticed that the extremely familiar #19 Polk bus (that also crawls over Potrero Hill) stops right at the foot of the stairs. So I could’ve taken this bus without long waits for a “neighborhood bus” (as in the #36 Teresita and #37 Corbett, for example). 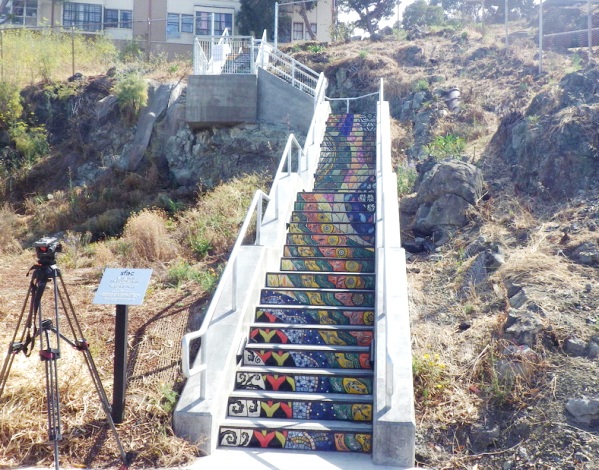 Here’s some detail from the foot of the stairs. 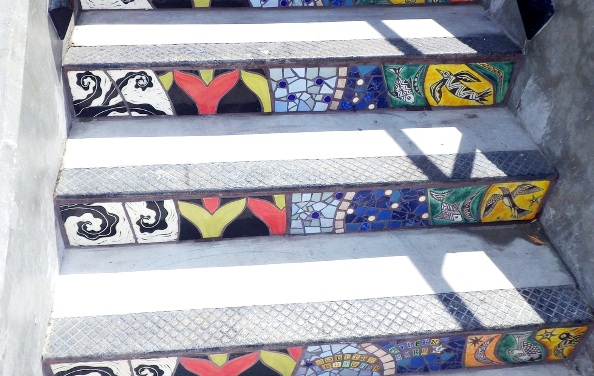 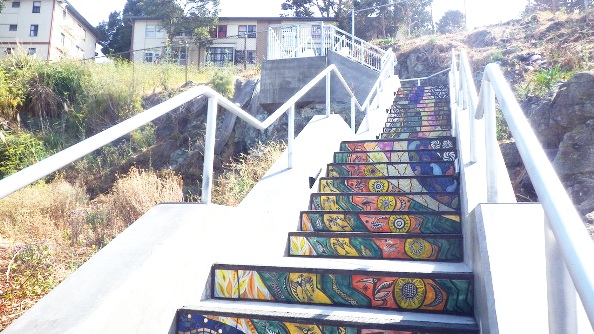 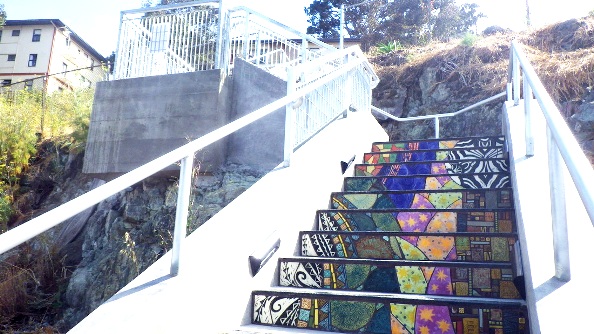 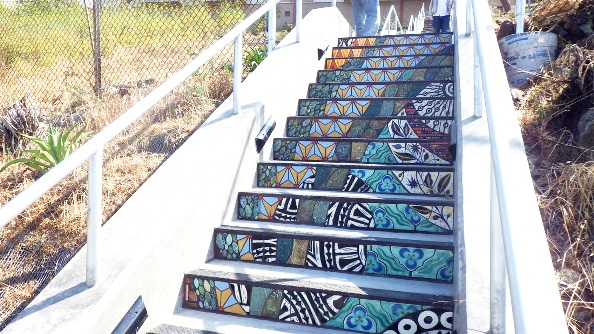 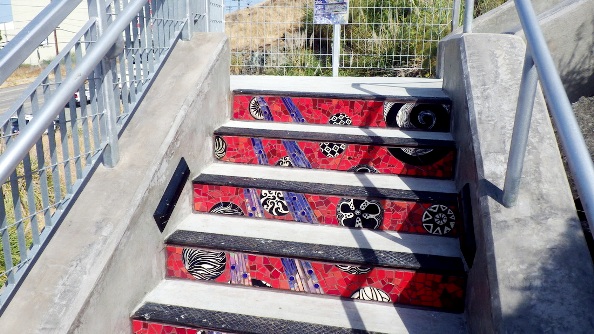 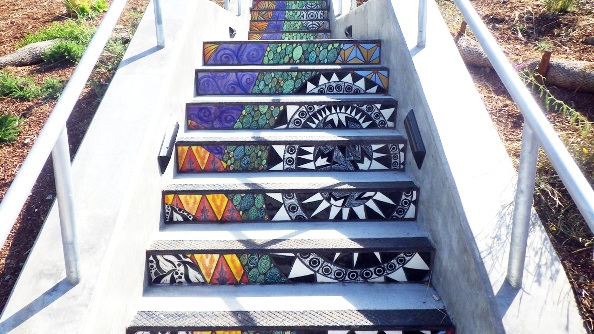 Go see this in person! 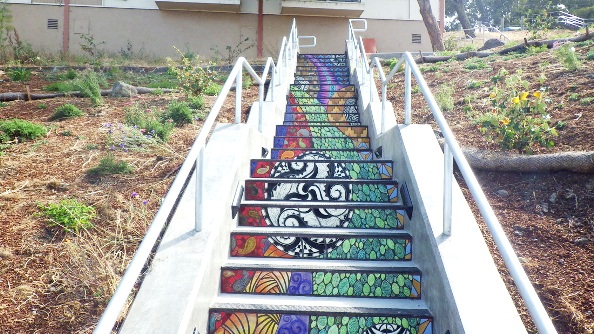 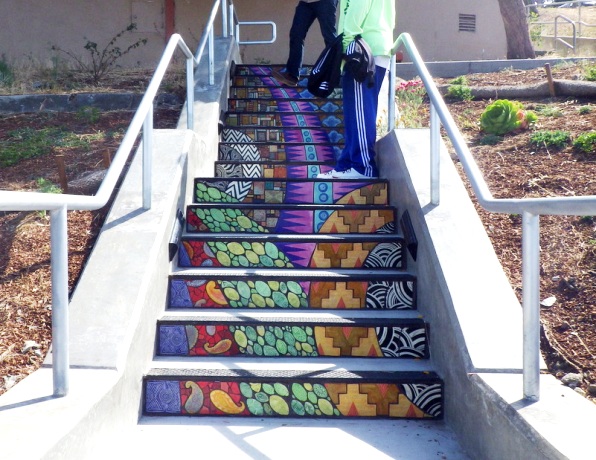 A closer look at the designs… 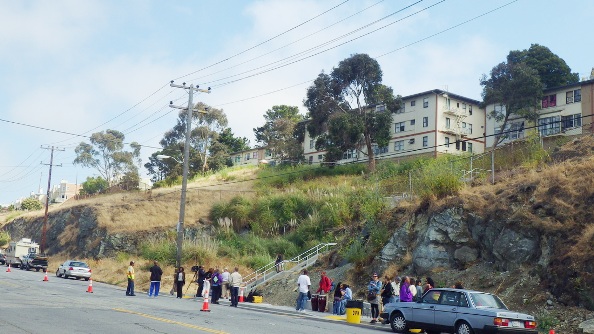 Here’s what it looks like from the foot of the staircase.

I was able to get a shot of the gorgeous (and delicious) cake before it was cut. 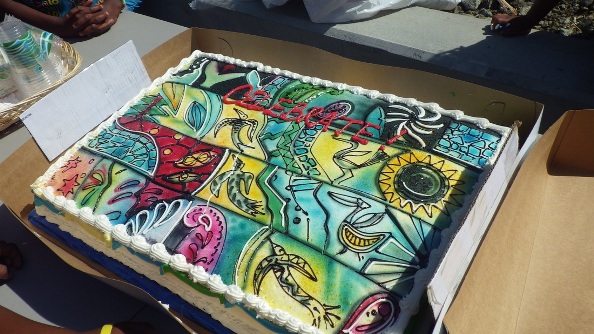 Before the ribbon was cut, attendees were treated to some bongo playing and several short intros to — and speeches by — people who helped make this artwork possible. The plaque is at the foot of the stairs, attributing “Flights of Fancy” to artists Aileen Barr and Colette Crutcher. (SFAC = San Francisco Arts Commission.) 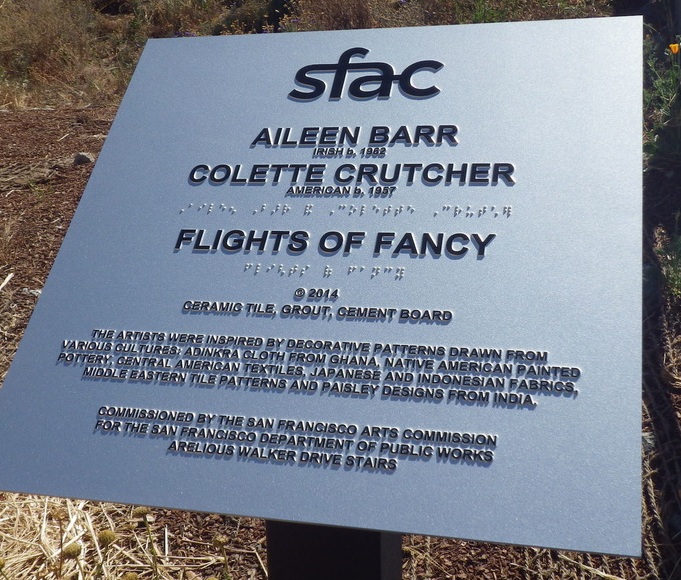