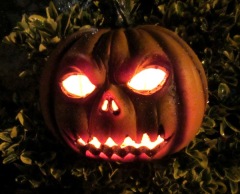 Despite the rain, despite not being in The Loop – we got the largest number of trick-or-treaters we’ve had in the last ten years or so. We had over twenty kids come by…

And they were a colorful troupe, in their costumes. Ironman and Spidey and Batman-in-arms and Belle, a delightful little bumblebee, an elegant witch and an eskimo and a cheetah, a little engineer (the kind that drives trains, not the kind that builds bridges or software), a strawberry and a ninja, an adorable fireman, a tall Kitten and I think Minnie Mouse, a pumpkin and a princess. An evil jester with a death’s head, and a zombie and a zombie pirate. Too many to keep track of, though I wish I had.

Near the end of the evening, Walter Caplan came by with the trick-or-treaters, dressed as a mad scientist. But he wasn’t collecting candy (though of course we offered him some). Instead he dropped off a little goody bag with a Halloween snow-globe and a thank-you note for taking part.

Thank you, Laura Bloch, and Walter Caplan, of the Forest Knolls Neighborhood Organization for organizing and getting the word out.  Great job organizing this successful event. I hope all the participants enjoyed it as much as we did.

And if you missed out this time – next time, (and I hope there will be one) contact Laura early for your sign and your pumpkin so people know you’re open for Tricks and Treats!

2 thoughts on “A Happy Halloween at Forest Knolls”