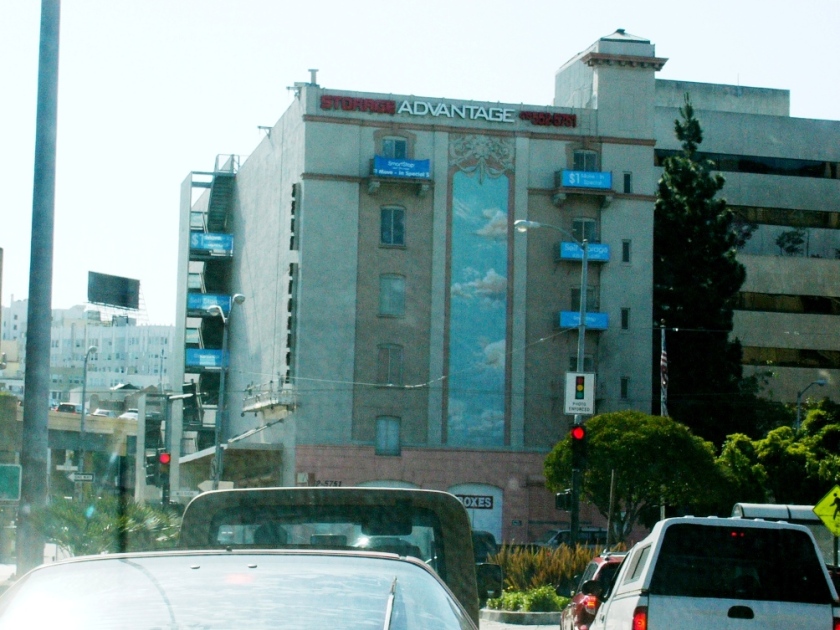 It was an unexpected grace note amid the freeways: a mural of clouds in a blue sky viewed through a colonnade.  What was impressive was the transformational effect. A boxy concrete building became a canvas. It was spectacular.

And located as it was on Duboce, close to our area’s nearest access to 101 and the Bay Bridge, I saw it often.

So it was with great sadness I noticed, recently, that it was gone. The side of the building’s been painted a matt gray. Only a small sample of the former beauty remains, in a matching panel on the front of the building. I regretted not having taken a picture earlier, when it was all still there.

[ETA: Here is my “re-creation” of the mural — made with a public domain photo of clouds, and a computer-art program. You can check it against the Google link below to see how close I got.]

Usually, for a place like San Francisco, it’s relatively easy to find pictures on the Web. Lots of people out there with lots of cameras. But I didn’t find this one — perhaps because the best view of this mural came from a freeway where people wouldn’t be hanging out taking photographs.

The best I could do is find this view on Google Maps… I don’t know how long it’ll be up, but for now clicking on it shows a picture of the mural as it was. (It may take a little time to load and appear blurry while it does so. It needs Adobe Flash, and even has a 3D mode — which I think needs the kind of 3D specs with one green and one red lens.)

One thought on “Cloud Mural Gone”