On Saturday  (2 Oct 2010) I took the Muni downtown from Forest Hill Station. I do this often enough that I know the drill, but seldom enough that I don’t carry a pass – or have the correct change. I always need to use the change machines. 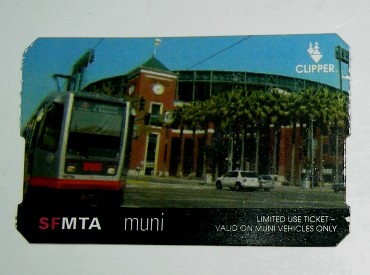 But on Saturday they were out of service. Every single one was blocked with yellow tape. I looked at the station-master in puzzlement. She waved me over to new ticket machines on the other side of the station. Those didn’t need the exact change, they worked with credit cards. And they issued paper tickets at $2 for a single trip, $4 for a return fare.

Whatever happened to the transfer with the 90-minute validity? I wasn’t sure.  (It was academic, anyway. I was meeting friends for lunch; it would take more than 90 minutes.) After a little fumbling, I got a return ticket. It had a nice picture of the ballpark on the front.

On the back were a couple of icons indicating how to pay (just tap your card on the reader); and some fine print. 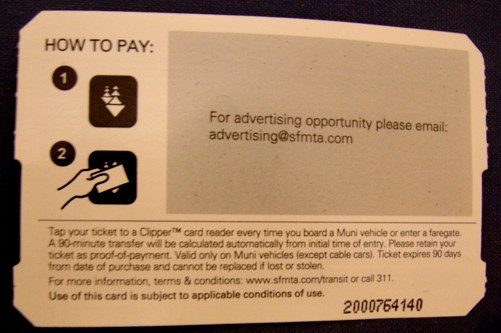 I couldn’t figure out what was meant by “A 90-minute transfer will be calculated automatically from initial time of entry.” I went looking on the SFMTA website, but that was some miles away from being crystal clear…

By contrast, here’s what the old-now-obsolete transfer said on the back: 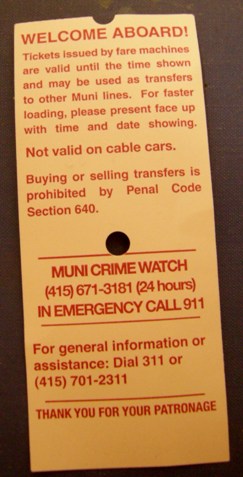 So anyway, I called 311, and within a minute or two (at 11.30 at night!) got a helpful lady who assured me that I could use the colorful-but-baffling ticket in exactly the same way as the old Muni transfer. It really was valid for 90 minutes from the time of entry, so if I took a short trip downtown, I didn’t have to buy a return ticket.

I’ll be trying it out one of these days, and will update this post then. I might even break down and get a Clipper card. It’s the San Franciscan thing to do. [ETA: It works. It’s valid for 90 minutes, no problem.]

(Other than that confusion, things were going reasonably well. Transit staff were on duty everywhere telling people what they needed to do.)

One thought on “Muni, Clipper and Me”