I thought I was the only one who’d noticed the fabulous grass on the roadside between  Junipero Serra and Randolph, next to a gas station. It’s an intense green, and instead of being mown short, it looks like long green fur. I pass it frequently on my way back from a southbound trip, and I always admire it. It’s such an unlikely location for such a beautiful planting. There’s a constant flow of traffic, and a few years ago, a shooting.

But of course I wasn’t the only one who’d noticed, and I was delighted to see an informative article in the Chronicle (in Pam Pierce’s column) in response to a reader query. It’s a fescue sod planted by the San Francisco Water Department’s Jerilyn Downing about 10 weeks ago. It doesn’t require much water once it’s established (it did have to be irrigated quite heavily initially), and it’ll only be mown twice a year. Ms Downing recommended a UC Davis publication on no-mow fine fescues by Ali Harivandi. (It can be downloaded as a PDF file: #8391 in UC Davis’s catalog.)

I thought I’d get a photograph for this post. There’s no parking right there, but I made a right turn onto Randolph, found a place to squeeze my car in, and wandered along the street. It looks wonderful. I really hope it works out. But a few weeds are finding their way in already. It may be at its loveliest right now.

So next time you’re coming back from Serramonte or Pacifica or the airport, and the light changes against you at the intersection of 19th and Junipero Serra – rubberneck the grass. 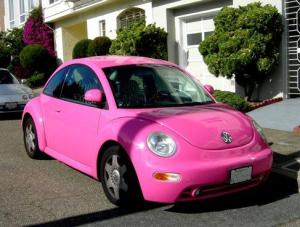 [Edited to add: Oh, and as a bonus – while I was photographing the grass, I encountered the pinkest car I’ve ever seen. And it had zebra-patterned upholstry…]