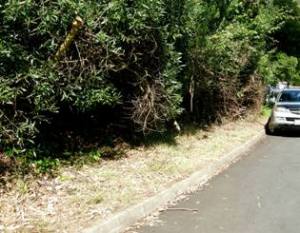 A few days ago, I posted (here and here) about UCSF cleaning up the brush along Christopher and Crestmont. Over the last couple of days, I’ve been walking around and talking to people who live near there. It’s looking good.

They did a pretty neat job of trimming back the bushes that were overhanging the pavement, so it’s easier for cars to park without blocking the roadway. Some of the overhanging branches have been trimmed back too, and it’s all been nicely and professionally done so it actually looks good rather than raw and nasty. They’ve been careful to preserve plants that people had put in or nurtured along the road edge.

They actually felled and removed two hazardous trees along Crestmont. Any others presumably must await the full hazardous tree report.

And as a bonus, this old prickly-pear cactus appeared, apparently thriving under all the acacia! (You may need to click on the picture to embiggen it to actually see the cactus.)

Thanks, UCSF; and thanks, Forest Knolls Neighborhood Organization, which has been working to make this happen.

Separately, I’m not sure where the dispute with the city stands on who has responsibility for hazardous trees. The map below shows the issue: The purple line (I think) shows the UCSF boundary. (This map – made in Year 2000 -is based on an excerpt from the EDAW report done for UCSF. The colors just show in which direction bits of the mountain face…blue is north, red is west, yellow is south, and green is east.) 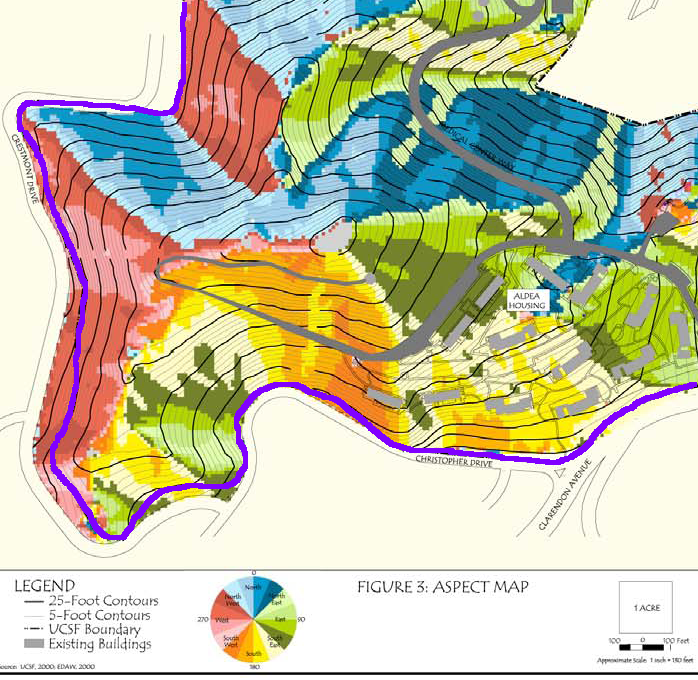 According to this map, the UCSF Open Space Reserve boundary is not exactly aligned to the roads. There’s a space between the road and the reserve. And that’s where some of the trees are that people are worried about. Of course, if the map is accurate, then one crucial area is fairly obviously UCSF’s: where Crestmont makes a sharp turn from North to East.