About a year ago, I posted about some fantastic grass that had been planted near the intersection of Junipero Serra and 19th. It was almost surreal in the intensity of the green and the furry texture. Here’s what it looked like then.

But when I went to take some photographs, it already had signs that it might not last. Here’s what I wrote then:

But a few weeds are finding their way in already. It may be at its loveliest right now.

So next time you’re coming back from Serramonte or Pacifica or the airport, and the light changes against you at the intersection of 19th and Junipero Serra – rubberneck the grass.

It was true. A year later, it’s shaggy, not furry. I wouldn’t say it’s ugly; it looks like hay. It’s brown, and gone to seed which is what grasses do. Areas shaded by street trees are still green, so it may be the sun, I don’t know. It’s very springy under foot. Here’s what it looks like now.

And here it is from another angle. 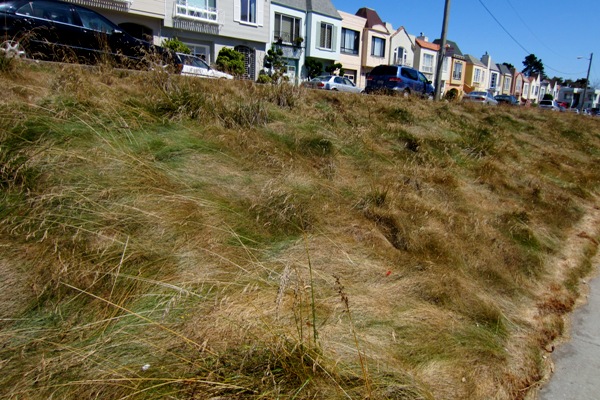