Golden Gate Heights Neighborhood Association hosted a District 7 Candidates’ Forum, and I went to see and make notes. Of the 9 candidates running for Board of Supervisors for District 7, 6 showed up. (Lynn Gavin, Julian Lagos, and Bob Squeri weren’t there.)

I’ll try to be impartial, but I’ll state my bias up front: I love trees and habitat for wildlife and those are my issues. Each candidate made their brief statement, and then the audience asked questions.  The questions related to:

So in alphabetical order, here they are. (The pictures weren’t taken at the forum. I forgot. They’re from a bunch of other sources, so if any candidate wants the picture replaced – email me at fk94131 at yahoo.com.)

He introduced himself as a professional geographer and cartographer who’s done work for the City, a smart small business owner, father, and husband. (His daughter is 5th generation San Franciscan.) Sean Elsbernd appointed him to the Pedestrian Safety Committee. He’s also volunteered with Project Homeless Connect with the homeless, and with Project Open Hand, and plays guitar for children’s programs. He stands against the use of public funds in elections, and believes the money could be better spend on other things. Key issues: Homelessness, panhandling – and preserving trees.

Andrew had to leave early (clashing appointment) and could only answer the first question, on parking. He opposes Sunday meters and extended hours, and sees a need for training the enforcement workers. People get tickets even when they’re legitimately parked, which becomes harrassment. 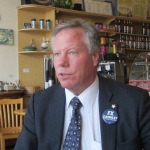 FX spoke about his deep roots in District 7 where he’s lived most of his life and raised his family – a neighbor. He was a stagehand and served on the Board of the SF PUC, and also on the Ports Commission. He spoke of a deeply personal reason to run; his brother John, ill of terminal pancreatic cancer, charged him with doing something to benefit the future generation. So he decided to run for Supervisor. His vision for San Francisco includes jobs, infrastructure, neighborhood character, reforming non-profit organizations, preserving green spaces.

Joel ran through his background – raised by a single mom, went to University of Michigan on a scholarship and became a journalist – a watchdog. He worked for the ACLU, on protecting everyone’s constitutional rights. Then he got a mid-career scholarship to Harvard, where he got a Masters in Public Administration because he wants to focus on working for people in the government. Hence his run for Supervisor. He stressed that as a candidate who had qualified for public funding, he was truly independent and not beholden to any special interests; he would be an advocate for the people of his district. People were concerned about ideological decisions in the government, and he stood for common sense: Focus on the basics before trying to raise more money. He supported viable small businesses in San Francisco; the city shouldn’t be a theme park with all the real work going on in Silicon Valley. As an example of common sense: there’s room for trees, and there’s room for native plant gardens, but spending tax money to cut down thousands of trees for the sake of native plants doesn’t make sense.

Mike has an MBA from Loyola in New Orleans, and ran a couple of small businesses. He  moved to San Francisco when he became an options trader after he bought a seat on the Pacific Stock Exchange. He’s on the board of  St Stephen’s and of the YMCA and volunteers in various areas. Former Mayor Gavin Newsom appointed him to the Ethics Commission and later to the Board of Appeals. He has 40 years of business experience, and 10 years of government experience. He noted a Chamber of Commerce survey found people were most concerned with the economy, pensions (or pension reform), and quality of life issues, i.e. homelessness. He thinks pension reform is essential going forward, with a cap on retirement benefits for new hires.

This is the first time I’ve seen Glenn Rogers. His platform is listed on his website, and that’s pretty much what he ran through in his statement: Creating a Department of Public Safety;  standardizing fire hydrants so all firehoses can access all hydrants; tax Recology (the garbage company); Parks Bonds should include maintenance costs (at present, they’re restricted to capital expenditures); plant road medians with native plants; install solar windows in downtown buildings (like solar panels, only they’re windows, and they generate electricity), and those buildings should have green roofs.

Norman said he was a 3rd generation San Franciscan, and his focus was improving the lives of families and children. Though he initially trained as an engineer, his true interest was education, and so he went back for an MA in education. He was President of the School Board for 8 years. He believes his strength is getting people together to discuss and work out problems. He mentioned some successes of the School Board – reducing truancy, raising test scores, reversing declining enrollment, and saving the Sunset Childcare Center that ran out of funds mid-year leaving working parents stranded.

It was an interesting evening, and kudos to Golden Gate Heights for setting it up. I’m hoping to attend more forums, and get their views on a broad range of issues. Meanwhile, I welcome any comments.

We’re in District 7, and Supervisor Sean Elsbernd will be termed out this November. The position’s up for grabs, and now there are NINE candidates running. Here’s a 3-minute video of four of the candidates (FX Crowley, Joel Engardio, Mike Garcia, and Norman Yee) speaking at a Town Hall meeting on the Arts. (Click on the picture to go to the Youtube video.)

Edited to Add: Andrew Bley was at that meeting, but somehow wasn’t included in the previous video (which we didn’t make, incidentally) but we’d include him with the “top candidates.”  Here he is, making his point in a musical half-minute.

I’ve met five of them thus far: Andrew Bley, FX Crowley, Joel Engardio, Mike Garcia, and Norman Yee. Over the next few weeks, in the run-up to the November election, I’m hoping to write something about platforms and views. Meanwhile, here are the websites for those who have them: