We’ve known for years that coyotes are all around us in Forest Knolls – I wrote about it here when a couple of neighbors reported seeing them. (LINK: Coyotes Among Us)

But this time, neighbor Michelle Lukban got this really neat picture (published here with permission). For everyone who’s been jealous of Bernal Heights coyote pictures, we got ours! [Edited 3/27/17 to correct attribution of picture] 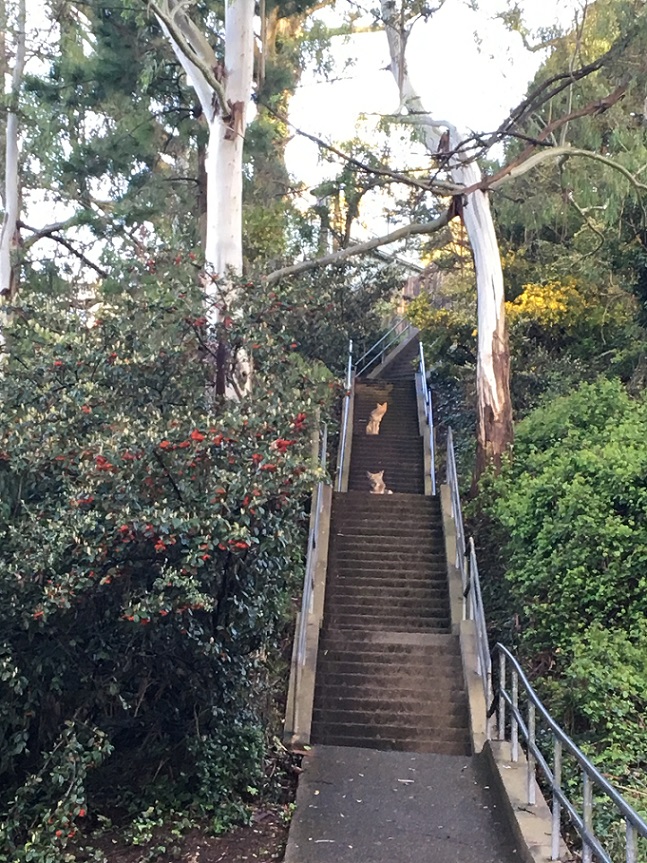 BEING CAREFUL AROUND COYOTES

Janet Kessler,  the Jane Goodall of SF’s coyotes, has for many years been observing, photographing, and reporting on our San Francisco coyotes. Her website is at CoyoteYipps.com. She’s also involved with Coyote Coexistence, an organization that helps people and coyotes to co-exist safely.

For guidelines on staying safe – and keeping pets safe – around coyotes, click on this LINK:  Coyote Coexistence Guidelines

And here’s a 30-minute video on the subject.

Coyotes are not very concerned about people, and are generally quite shy of them. But they are very interested in dogs. Coyotes are territorial animals, and dogs could be considered interlopers. Also, some dogs chase coyotes, and so coyotes may feel threatened.  Often the coyote will remember which dog it was. Don’t let your dog do this. It could be dangerous for both animals. Finally, really small dogs – and cats – may be viewed as prey. This is rare, but it has happened. If you have pets, the video above may be useful.

A couple of days ago, neighbor Greg Flowers posted this on our Nextdoor site. (It’s reproduced here with permission.)

“After my experience last night, I plan to behave much differently when I am met by a coyote (or two) on the Sutro trails or on our neighborhood sidewalks. My usual MO is to respect its space and maybe snap a few photos of it as past encounters have been limited to in the woods of Mt. Sutro, and they usually run away.

“I took my dog out last night for a walk around the neighborhood around 10:45p following Christopher Dr east. As we were passing 15 Christopher, there was a rustle in the bushes and my dog lunged into the darkness. I pulled him back and we continued a few steps and then I saw it was indeed a coyote. It crossed the street into the woods and we made it to Clarendon before I turned and saw there were now two coyotes stalking us.

“Now I’m concerned and my dog is very interested in playing or giving chase. I tried to make myself look big and menacing, yelled a bit and made like I was going to charge them but they continued toward us so I then made the mistake of turning and continuing down Clarendon to get to Oak Park, looking over my shoulder constantly. No cars or people were out at this time and the fog + blood moon combo + coyotes stalking me really affected my nerves. The coyote in front crossed Clarendon as if it was planning to circle around to surround us and so when I got to Oak Park we turned the corner and sprinted all the way back to Christopher and Oak Park til we got home. That wasn’t the smartest choice but they didn’t follow me back into the neighborhood which was a huge relief.

“I’m posting this as a learning experience for myself and hoping it will help raise the awareness about the coyote presence around these parts. The closest I let them get to us was about 20 yards and my dog is 60lbs and these coyotes appeared larger than him. Because they were unaffected by my dog’s size and my scare tactic, I looked online and found this explanation of how to ‘haze’ coyotes so that they will fear humans again: Coyote Hazing: Guidelines for Discouraging Neighborhood Coyotes

“Hopefully we can make a neighborhood effort toward keeping coyotes, all our pets, and ourselves safe and that starts with coyotes maintaining a healthy fear of humans.”

As readers of this site know, I’m a believer in coyote coexistence. This report was concerning, especially in the context of recent reports in which coyotes attacked dogs (one fatally) at Pine Lake (behind Stern Grove), a popular dog-play area.  So I reached out to Janet Kessler, the Jane Goodall of San Francisco’s coyotes. She’s been studying our coyotes for years, and maintains a great blog, CoyoteYipps.com where she puts up her observations. Why were we suddenly getting this bold behavior?

“There seems to be a change in their behavior going on, but I’m told that it’s not due to habituation, it’s due to the drought. All urban coyotes are habituated by definition, yet they still keep a healthy distance (can’t use habituated and wary at the same time). For dogs, it’s a different story — and it’s going to be the same story whether a coyote is habituated to humans or not. Habituation to humans has nothing to do with coyotes approaching dogs — especially when they are curious about them.

“[Greg] did the right thing by moving away from the coyote — that’s how you diffuse a situation and maintain control — you are simply not going to engage. If a coyote follows… he’s just checking out your dog, gauging whether it’s a threat to be worried about, and making sure it is a safe distance away.

This is also a concern; I know some people in Forest Knolls do have outdoor or indoor-outdoor cats. I think it’s also important for people with small dogs to be especially careful. Coyotes may see them as rivals or as prey, and they’re much more vulnerable. Humane Society guidelines recommend keeping cats indoors, and not letting small dogs off-leash in the backyard at night. Here’s their article: Coyotes, Pets and Community Cats.

From Janet Kessler: “And, yes, coyotes have been approaching dogs, much more than we’ve seen before. Walk away always, and keep walking (never run) away from the coyote, even if he follows.”

It also has some great photographs and observations of coyote behavior.

This post is reprinted with permission from SFForest.net
Our area does get coyote visitors, and so do Twin Peaks, Laguna Honda, and possibly Sutro Forest. The video linked below has pointers for co-existing with coyotes.

As frequent visitors to our urban wild-lands and parks probably know already, coyotes are part of our city’s wildlife. They travel over considerable distances alone or in family groups, so you could actually see them anywhere (though wild-lands where they can hunt gophers are probably the best bet). And – this is coyote pupping season. Pups have already been seen in Golden Gate Park and elsewhere.

A “HOW-TO” VIDEO ON COYOTES AS NEIGHBORS

It might be helpful to know as much as possible about what behavior to expect from them, especially in relation to ourselves and pets. For a one-stop informational video presentation — the most up-to-date there is — please view CoyoteCoexistence.Com‘s new video, Coyotes As Neighbors: Focus On Facts. Here’s the video:

If you have specific questions or issues, you may contact them at coyotecoexistence at gmail.com for one-on-one assistance.

Two neighbors have reported coyotes nearby in the last few days – one on Warren Drive, and one on Clarendon x Panorama.

“On 12/22/2012, approaching Clarendon from Panorama, waiting at the traffic signal, a rather frisky coyote crossed my path, going from south to north and into the undeveloped area bordering Clarendon on its East,” wrote John V.

Someone else saw one a few days ago on Mountain Spring Drive, which is just across Clarendon Avenue from us. In the last year, I’ve seen them myself on Twin Peaks, Glen Canyon, Diamond Heights, and in the grounds of Laguna Honda Hospital. They’ve also been sighted near West Portal, the Presidio, and elsewhere in the city. I’ve posted about coyotes here before, but I thought I’d do so again. 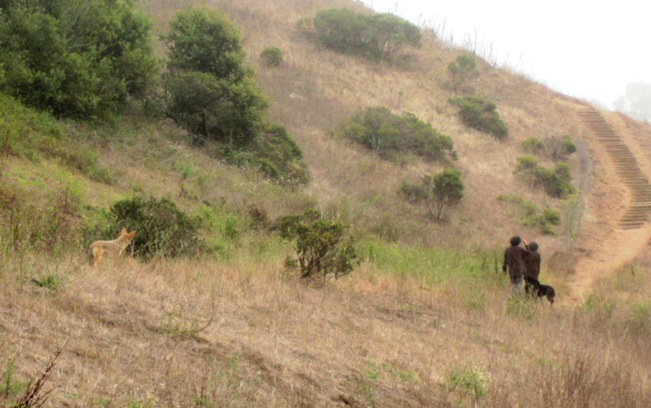 From what I’ve been told, there are only about 12-18 coyotes in San Francisco. They are territorial, so it’s unlikely the number will increase very much. We know the Golden Gate pair had pups last year. (Click HERE for a cute picture of the pups at play; it’s from the RichmondSF blog.) The one (or ones) we’ve seen may be a Golden Gate pup grown up and seeking new spaces. (Coyotes look bigger in winter, when they grow their winter coats.) Or they could be any of the resident coyotes from the territories around us.

Coyotes cover great distances in their explorations, so it’s possible to see them almost anywhere in the city. The west side is particularly good for them; they mostly take gophers and rats and mice, available in the grasslands, and they need cover to hide from dogs and people. The west side of the city has both.

Generally, coyotes aren’t much bothered by people (and are shy of them). They are bothered by dogs, who they see as competitors and a potential threat. I’m told they remember dogs who chase them. Like dogs, they probably also can recognize individual people.

Though coyotes mainly prey on rodents (and are a much better solution than poisons like the ones that killed the Glen Canyon owl), they have been known to takes cats and even small dogs. They may fight even with big dogs who chase them, which is not good for either dog or coyote. So it makes sense to be careful – keep your cats indoors especially at night, and leash your dog if a coyote is around. Generally, don’t run from a coyote; it may trigger a chase instinct. Instead, walk away calmly. I’ve found yelling loudly at a coyote usually makes them run off in a hurry. (I’ve only done this once, when I was walking in Diamond Heights at night.) If  you’re concerned about coyotes, carry a “shake can” – a loud rattle made of some pennies sealed into a small aluminum can.

Janet Kessler, the Jane Goodall of San Francisco’s coyotes, spends a lot of time observing these animals and documenting her observations on www.coyoteyipps.com and she’s also written an article on peaceful coexistence for the Marina Times. You can see that HERE. 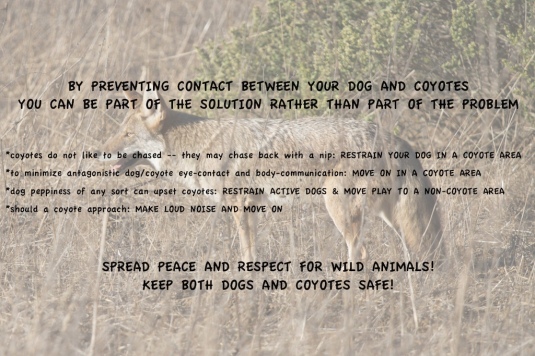