Another lost kitty, this time from San Francisco’s Inner Sunset neighborhood, across from Golden Gate Park.  Here’s the photo and the message from Heather, the cat’s owner.

“Boycat” big orange male striped tabby with green eyes and white tip of his tail – 15 pounds, big sweet cat, indoor only, he has never been outside and will be scared and confused – likely hiding. Is he in your garage or yard? Hiding on your spare tire? No collar, no chip. Escaped from our apartment at 1220 14th avenue (the big apartment building on the corner behind Andronico’s) sometime during the day Thursday January 16th. He will be unable to find our apartment door, as it is upstairs in an apartment building.

Please catch him if you can – he is sweet and mild, or please all even if you see a wandering orange striped tabby. He is our pal and we hate to think of him lost and scared! Call any time! [number deleted]. Thank you.

And here’s some further information:

We have had 2 sightings that place him running across Lincoln from the area of our building the day he went missing, and one in the Arboretum [i.e, the Botanic Garden in Golden Gate Park] just inside the gardeners’ entrance near 10th [Avenue] yesterday, so we are continuing to look for him!

If you see him, please call Heather!

Jennifer, a former neighbor asked me to post this. Her cat, who currently lives in Forest Knolls, is missing. If you see him, please email her at jenadibi@att.net 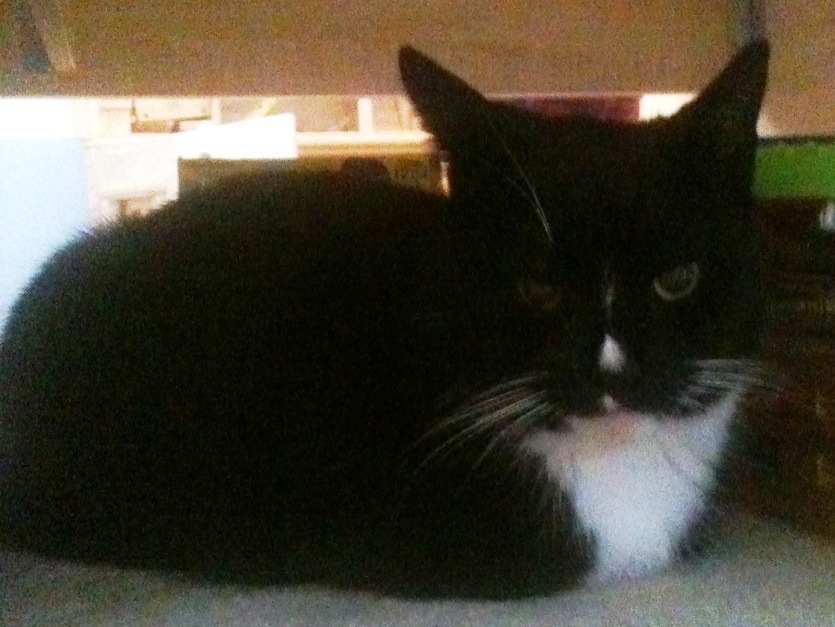 I am no longer a member of the Forest Knoll group as we moved out of state.  However, my cat has been staying on Warren Drive with a friend until I can come back and transport him to his new home. Would you be able to post this message to the listserve for me?

He has been missing since Thursday morning, November 21st.  He lives on Warren Drive near Oak Park and responds to the name Sky Kitty.  Has anyone seen him?

Please keep a lookout for Sky Kitty, and email Jennifer if you see him.

A note from a neighbor:

Our gray/brown/black Maine Coon cat, Rosie, has been missing since yesterday afternoon [6 Jan 2012] from her home at +++ Christopher, near Oak Park. She is an indoor – outdoor cat, but rarely stays out long. She has a collar and tag, but it’s hard to see under all her fur, and has been known to fall off. She is usually afraid of strangers, and has never been in a fight.

If you’ve seen her, please email  or call us at [Edited to remove] . Thanks!

“Thank you to everyone who expressed concern. Rosie seems to have gotten accidentally detained in a neighbor’s garage. She’s fine, and we’re happy to have her home.”

Like many of us in this neighborhood, I like birds and animals, including cats. So I was dismayed to see the recent  SF Weekly with a huge cover picture of a demonic cat. It contained an article by the controversial journalist Matt Smith, using as fodder a press release from the Smithsonian about a study done in 2004.

That study implied that cats are the main cause of death of small birds. It’s become a talking point for those advocating stronger measures against feral and outdoor cats.  But did the study’s results justify it? No way.

It sounded pretty bad. According to the website of the Smithsonian, “The main determining factor was predation, which accounted for 79 percent of juvenile catbird deaths within the team’s three suburban study sites. Nearly half (47 percent) of the deaths were attributed to domestic cats…”  This makes it sound like cats killed a huge number, over a third of the birds. What huge number was it, actually?  Well, six.

The study followed 69 young catbirds (the name is a coincidence, it has nothing to do with cats really) by putting tiny radio transmitters on them. In the five months of the study (May-September 2004),  42 died from predators, glass-panes, or disease. Cats killed only 6 of them. 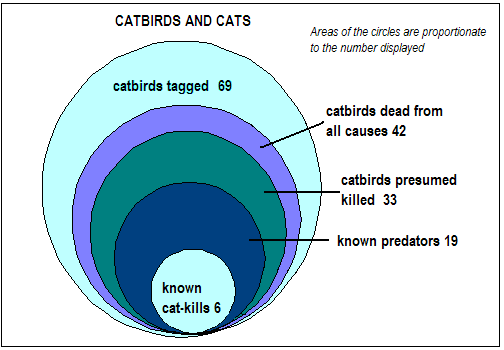 WHAT THE RESEARCHERS DID

Working in three Maryland suburbs filled with homes and gardens, the  researchers tagged a total of 69 baby catbirds with tiny radio-transmitters. They tracked the birds until the bird was found dead, or its signal disappeared, probably meaning it had moved on.

Of the 42 that died, the researchers figured 33 were killed by some kind predator. For 19 of them, the researchers thought they could make a good guess at what kind of predator got the bird. Besides the 6 actually killed by cats, they thought another 3 probably were because they were found headless. But it turns out that many hunting birds (owls, hawks, for instance) also bite off the head first, so assuming cats did it is a stretch.

Unfortunately, when the study was published, the abstract (the summary that’s the only thing most people read) said:

Why is this misleading?  Two reasons. First, it includes the headless birds that probably were killed by something else. Second, it compares the number with “known predation events” — which just means the number of cases where they guessed at who killed the catbird. What they should use is a comparison agains the whole bunch of tagged birds: 6 out of 69. That would be 8.7%.  The graphic below represents the real story.

And since it’s in the nature of predators to go for the weakest and slowest, it’s more than likely that if the cats didn’t get them, something else would have… an owl, a hawk, a rat, or disease.

What really hurts our birds is destroying their habitat. Everywhere in the city, bushes and thickets are being removed, even in the so-called “Natural Areas.”  Some ground-nesting birds like the quail are particularly affected. It’s easy to blame cats, especially feral cats. Though cats do hunt birds, they’re far more likely to get rodents. But small birds are prey to everything that hunts: hawks, owls, coyotes. They need places to hide and nest.

Not that I’m particularly advocating outdoor cats. Quite aside from the whole bird issue, they are themselves at risk from predators, whether with two legs or four legs or four wheels. As their reflexes slow with age, they face greater odds.

[A longer version of this article appeared on the Sutroforest.com site.]

A cat-lovers group is looking for volunteers. They care for a feral cat colony nearby.

This would involve coming once a week,  once a day, and takes 30-40 minutes of putting food and water in the feeding areas and loving some great cats.

If you’re interested, please email me at fk94131 at yahoo dot com, and I will put you in touch with the volunteers who  manage this feral cat group.