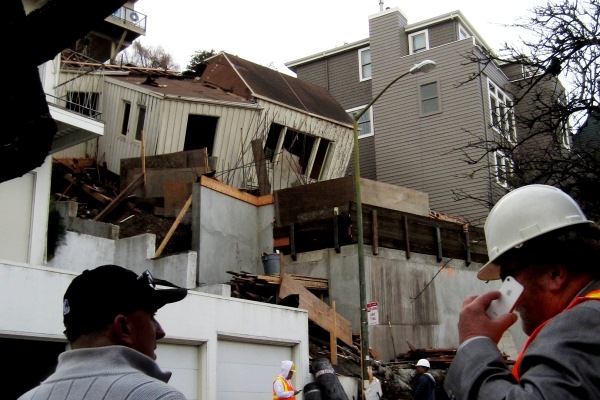 Just over on the other side of the hill, someone was getting a house renovated. They were lifting the whole house to strengthen the foundations so they could build higher. On Monday night, it collapsed and slid 50 feet downhill.

According to the SF Chronicle news report, the owner had wanted to demolish the dilapidated 1400-square foot rental and build a 4200-square foot house instead. He couldn’t get Planning Commission permission for that since it would reduce rental housing stock; instead he went with a major “remodel.” Neighbors fought the plan for 6 years, saying the larger house would be out of keeping with the neighborhood. But in the end, the Planning Commission approved it 5-2.

Looks like the house is totaled and the owner (Port Commissioner Melvin Murphy) will need to demolish and rebuild after all!

The good news: No one was hurt.  Although another building apparently had to be evacuated, I think it was found to be safe and everyone was let back in.  When I went by to take this photograph, they were allowing traffic through on Graystone Terrace, the narrow winding road below the structure.

It did make me think, though, about building on steep hillsides, and collateral risk. Hope whoever finally builds San Francisco Overlook is a lot more careful.