I’d gone for a walk toward Tank Hill, the other evening, when I saw a shape scurrying across the road. Raccoon! And sure enough, it was Garbage Night, and there was the overturned trashcan. As I approached, I made out its tail, sticking out of the trashcan, and then, as it heard me, it came out and tried to decide whether to stay or run.

The light was poor, and the picture worse, but here you are. (It scampered off before I could get anything better.)

I’ve been wondering what’s happened – raccoons never used to up-end trashcans like this. They’ve been on a learning curve, it seems. Apparently, that’s what urban wild-life does – it becomes smarter.  Here’s an article from Wired Science:  How City Living Is Reshaping the Brains and Behavior of Urban Animals

Meanwhile, our latest solution seems to be holding up – two crossed bungees, snagged outside the lid hinges on one side, and on either side of the main lip of the trashcan lid on the other. Like in this picture. 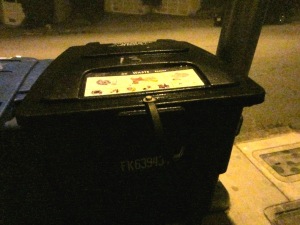 Walking around the neighborhood on garbage nights, we’ve seen other solutions.

One neighbor drilled a hole in the lid, and attached a strap with a bolt and washer. They then snagged the strap to the bar below.

But the solution that looked simple and ingenious was the one that tied up the trashcans with a bow, like shoe-laces in a larger size. Because it’s rope, not bungee, it doesn’t stretch, so presumably it’s difficult for the raccoons to pry off. 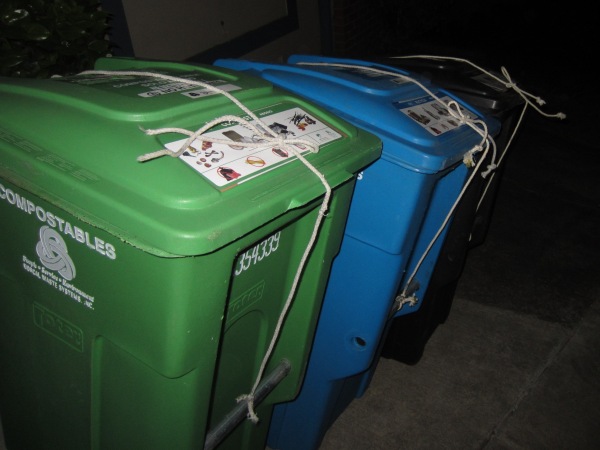 One thought on “Continuing Saga of Trashcans and Raccoons”