In the last day or two, I’ve noticed that one of the trees that screen our neighborhood from the UCSF Student Housing is brown rather than green. It’s a eucalyptus, and they don’t change color; in fact, if anything, they’re greener when it rains. So I went to have a closer look at this tree, which is one of the group by the Pump House at Christopher, just off Clarendon.

I wondered if it might have been girdled. “Girdling” is a process of killing a tree by cutting all round it, and has been used by Native Plant activists to kill trees in “Natural Areas.” One example it the Murdered Tree on Mt Davidson, clearly visible from Portola.

[See “The Murdered Tree of Mt Davidson” for more information about girdling.]

Looking more closely at the tree, I didn’t see any girdling marks. I also saw it was dying in parts, which I think is more consistent with poisoning. (It’s not very clear from the photograph above – if anyone wants to take a better pic and send it over, I’ll add it here.)

In the tree beside it, someone had stuck blue plastic marker flags from The Urban Farmer Store. I’m wondering if this tree – and maybe the ones beside it – is being poisoned by some eucalyptus-hater. 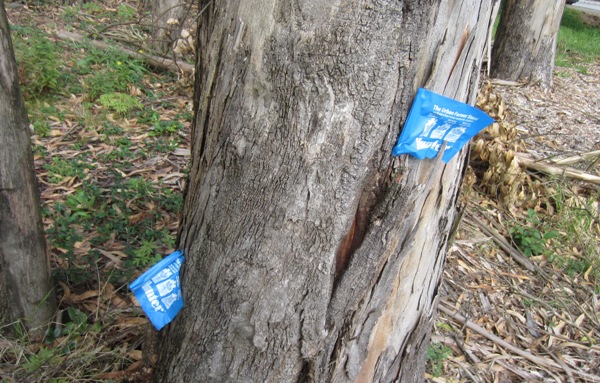 If so, it’s illegal. A tree can’t be killed along a public right-of-way without a proper 30-day-notice posting, which the Department of Public Works would do. (Or, if this is UCSF property, then UCSF would do it.) There’s a process that applies.

Even more importantly – it’s incredibly irresponsible. Poisoning a tree across the road from someone’s home will leave a weakened or dead tree standing near a residential house. Even before that, it could drop branches on cars parked beneath.

[Edited to Add:  I contacted UCSF; I was hoping they might get an arborist to determine what happened. If they did that, I don’t know about it. But they thought the trees might be the responsibility of the Water Department. In any event, three of the trees have been removed. One is still dead and still there, but it does not look like it’s a hazard. If anyone would like to follow up further, let me know.]

8 thoughts on “Is Someone Poisoning Our Trees?”