I was at a meeting yesterday where Nader Shatara of the San Francisco Department of Public Health (DPH) talked about the West Nile Virus (WNV). It’s a mosquito-borne disease that typically first shows up in birds, particularly crows and ravens and jays. In fact, unexplained dead birds are sometimes the first sign that WNV has arrived. It can be transmitted to people when a mozzy bites an infected bird and then a person. Usually a mild disease in humans, it can sometimes be serious or even fatal.

San Francisco recently had its first human case where the patient had no record of travel or other explanations for the disease. (An earlier case was related to an organ transplant.) He is recovering.

Cats and dogs can also get it, but it’s very rarely anything serious for them. Squirrels sometimes die of it, and it’s occasionally a problem in horses – though not, of course, in Forest Knolls.

The best way to prevent WNV is to control mosquitoes. In San Francisco, the most common place for breeding mosquitoes is in the storm drain system, mainly in the catchment basins under the street.

So for the last several years, the Water Department has been treating the catchment basins. Its contractor, Pestec, inspects the basins – he said the current routine is once a month – and if needed, puts in a something to stop the breeding. A colored dot above the grate shows they’ve checked it, using a different color each month. (This month’s color is blue.) Some of you may remember I wrote about it here two years ago.

At the time, they were using Bacillus Thurengiensis Israelensis (Bti) dunks. Bti is an organic way to kill mosquito larvae. Nader said they’ve switched to using Bacillus Sphaericus. (Click here for a  PDF version of an EPA fact sheet about this bacterium.) It also kills mozzy larvae, but apparently has a longer lasting effect. Only, in at least one catchment basin that was supposedly treated, they found live mozzies. They’re trying to find out why – one theory is the packet of bacteria snagged on something and didn’t get to the water.

San Francisco’s program to prevent WNV includes dead bird reporting. If you find a dead bird, you can put it in double plastic baggies (wear gloves or pick it up with tongs or something in case of other infections) and call it in for testing. (Click here for a  link with all the details.)

From the California Department of Public Health West Nile virus website:  If you find a dead bird, particularly a crow, jay, magpie, raven, sparrow, finch, or raptor, or dead tree squirrel, please file an online report at http://www.westnile.ca.gov or call toll-free 1-877-WNV-BIRD. Dead bird and dead tree squirrel reports are very important because they are usually the first indication that the virus is active in an area, and this allows CDPH to monitor the virus throughout the year.

Only, in San Francisco, this service is apparently closed between October 15th and mid-May.

REPORT MOSQUITOES AND AVOID HOSTING THEM 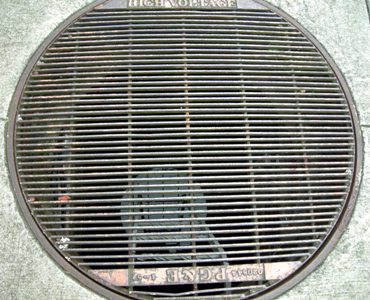 If you see mosquitoes in storm drains (or in PG&E vaults, which can also trap standing water, like in this picture), call the SF DPH and let them know.

I’m not sure if there’s a public hotline for it, but Nader was kind enough to provide his business card and his number is 415 252 3887; he’s at Nader.Shatara@sfdph.org

If you have standing water around your house (garden ponds, plates under potted plants, containers left outside, unattended bird baths) you might want to deal with it. For garden ponds, Bti dunks are good; or you can get mosquito fish (gambusia) if your pond’s large enough.

NOT A HUGE PROBLEM

Keeping it in perspective – WNV is not a huge problem in San Francisco. The last human case was in 2005. Our neighborhood especially may benefit from being surrounded by the eucalyptus forest – eucalyptus tends to repel mosquitoes. (There’s a 2009 research paper on it HERE; you can read the abstract for free but would have to buy the full report.) We probably don’t have a problem like the treeless parts of the city. The last dead bird was found near City College.

But anyway, except for their role in the food chain, who wants mosquitoes? No harm in keeping an eye out for them.