Miraculously at 9.30 or so the clouds broke. The portents were good as the full moon shone through the eucalyptus onto Forest Knolls. 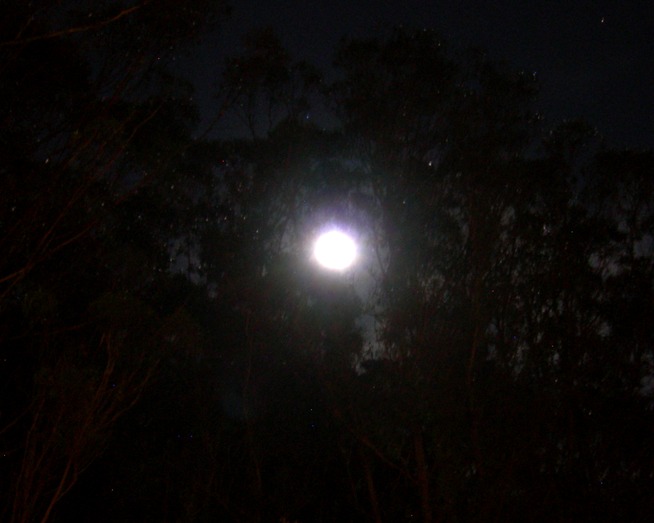 So we waited… maybe this would be an eclipse we actually could see! (I missed the last one, a partial, because San Francisco was fogged in.) By 11.30 p.m., the eclipse was well under way, and it was still clear. It was exciting. I kept switching between my camera and my binoculars. Of course  I knew full well the camera doesn’t have what it takes for good moon photographs, but I couldn’t resist documenting the moment. And the binocs are like a mini-telescope — I could see the lunar craters, I could see the shadow on its surface.

And then the clouds came back. By the time of the totality, our place was blanketed. We could see nothing of the moon.

I waited a while, then grew impatient. We jumped in the car, and drove in the direction of the clearest sky. I thought perhaps we’d have some luck near the ocean.

By the time we got to the bottom of Clarendon Avenue, the moon was clearly visible, just past the totality. A white rim shone over a duller yellow disk.

Photographing it was a problem. A thin drizzle kept blotching my lens with rainwater, since I was pointing my camera straight up.  I tried from inside the car, which gave a somewhat better result, but multiple images (perhaps from the glass through which I was shooting, perhaps from a movement of the camera).

Back in Forest Knolls, I found a good spot to moon-watch for a while, and took a bunch of photos anyway. It was nearly 2 a.m. when I called it a night. The clouds were taking over again. Still, it was a gift: The Unanticipated Eclipse.

One thought on “Peekaboo with the Lunar Eclipse”