We stopped by the Legion of Honor the other day. Though this museum isn’t quite in our backyard like the De Young or the Cal Academy, it’s only 15 minutes away — and it may be my favorite. At least currently: In addition to its wonderful permanent collection of paintings from classical to impressionist, it’s got three unmissable exhibits.

THE ROMAN FLOOR FROM ISRAEL

There’s a mosaic floor from Lod, Israel on display. It’s from 1700 years ago, but it’s so well-preserved it looks new. And it’s brilliant, like a carpet of tiny squares of stone. 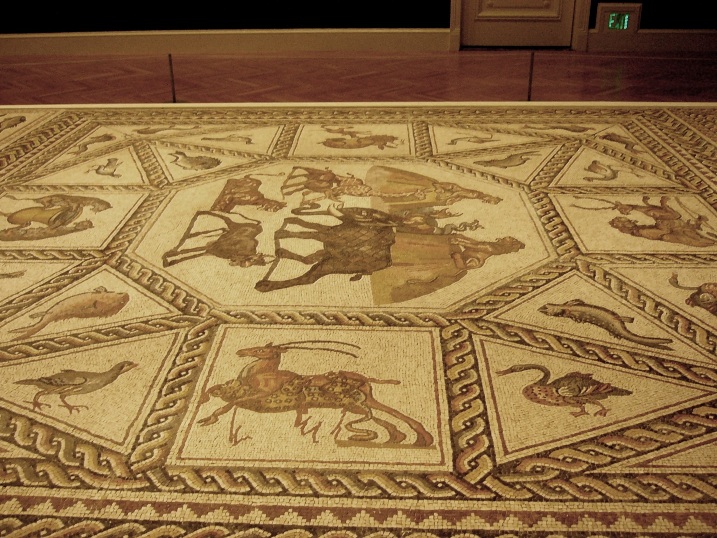 The most dramatic part is a water theme with huge fishes and ships; but I was also taken by the other side, which has a theme of predators attacking various animals.

I was surprised to find a tiger among the lions and leopards and snakes … tigers are jungle cats, and where’s the jungle? There was also a peacock. I’d always thought these animals to be Asian, so it was puzzling and fascinating. 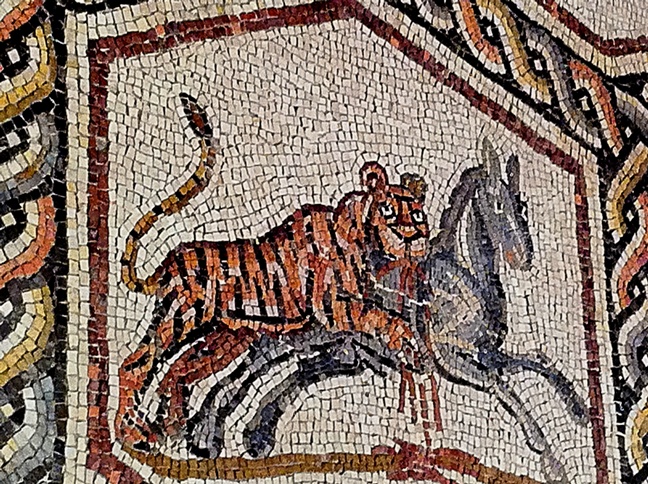 Also fascinating was a footprint. Apparently, when the archaeologists were lifting the floor to preserve it, they found workers’ footprints in the layer underneath. One of those is also on display.  (This exhibition is on until 24 July 2011.)

The storied Magna Carta is perhaps the first legal document in the world to give protection to the common man. The rights actually were restricted to “freemen” but they formed the basis for the expansion of those rights to everyone.

The first document, signed by King John of England is I think lost, but there are 17 surviving versions issued by subsequent kings. The one on display at the Legion of Honor is from the reign of Henry III, and dates back nearly 800 years to 1217. It’s in Latin, in a beautiful hand. I couldn’t read it, but the translation of one para hangs beside it. It gave me goose-bumps to read it. It’s only here until 5 June 2011.

SCULPTURES OF GOWNS IN PAPER

The final exhibition, down in the basement of the building, didn’t permit photography, I don’t know why. It’s “Pulp Fashion: The Art of Isabelle de Borchgrave,” a display of elaborate clothing reproduced in paper and paint. She’s inspired for the most part by classical paintings. It’s worth a visit for the sheer artistry involved. The museum has a picture on its homepage for now, though I expect this will change when the exhibit moves on — 12 June 2011, I believe. [ETA July 2011: No longer on the home page, this archive page has a bunch of pictures — including ones of the sculpture inspired by the painting here.]

The picture here is a public domain image of Eleanor of Toledo, painted by the artist Angelo Bronzino in 1545. This dress, in white with a bold black and gold pattern, is one that is reproduced in the Pulp Fashion exhibition. An interesting factoid: The dress never apparently existed (though Eleanor did). They gave the artist a bolt of the fabric and asked him to paint it as a gown on his subject.

[ETA: I should note that I’m a member of the Fine Arts Museums… it’s an annual membership that gives free access to two people both to the De Young and the Legion of Honor. If you want to see many of the exhibitions, it’s a whole lot less pricey than paying full admission each time.]