So some months ago, I’d asked – Did someone save the Squat and Gobble trees?

Squat and Gobble, the West Portal eatery that was being rebuilt after the fire there, had sought approval to remove a tree to provide heavy machinery access to the site. (I’d thought it was two trees that were scheduled for removal, but it was one.) But, as I reported then, work was well underway and both trees were still there. I was glad; West Portal has lost some beautiful trees, most notably an old one near the tunnel entrance when work was done there.

I wrote to Carla Short at the Department of Public Works, asking if the trees had been saved. She didn’t know. She replied:

As for the West Portal trees, only one tree was approved for removal in order to accommodate the crane for construction. I have not heard that they are planning to preserve that tree, so it may be still coming out. Their permit is valid for six months. If they found a way to work around it, though, perhaps they are preserving it, I just haven’t heard anything. If it does get removed, they will be required to plant a replacement tree, and some additional trees on the West Portal frontage.

Well, the tree was there through much of the construction, but when Squat and Gobble reopened, I found it was gone. Even the tree-basin the tree had grown in was gone. There’s no replacement tree there, nor any along the West Portal frontage.  I hope they’re planning to put them in. 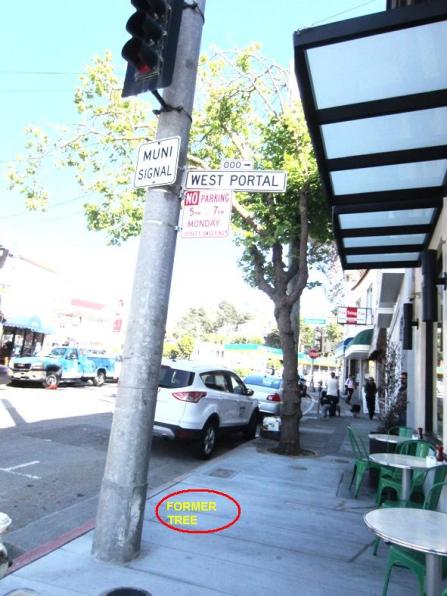 It’s just one tree, and it was removed through a proper permitting process.  But I’m beginning to see an anti-tree ethos in this city. Whenever there’s a project, whether private or City-led, trees are the casualty. There seems to be no emphasis on trying to preserve and work around them.

“The tree which moves some to tears of joy is in the eyes of others only a green thing that stands in the way.”
– William Blake, The Letters, 1799