If any city is celebrating the Supreme Court’s recent judgement about the Defense of Marriage Act, and about Proposition 8 (which made same-sex marriage illegal in Calfornia), it would be San Francisco. Everything’s coming up rainbows.

I went to Twin Peaks to see City Hall lit up. I’d been told Coit Tower also was, and some other buildings, but it’s City Hall that really counts. And it was visible, much more so than this shot below would indicate. (My camera really doesn’t like low-light conditions.)

The web’s been flooded with pictures, of course. But it was exciting, and I felt I really needed to see it, up close, in person. It was nearing 11 p.m. when I got to City Hall, but it wasn’t deserted. Clusters of people wandered around, looking at the lights, which were spectacular. Everyone was taking photographs, with everything from iPhones to professional quality equipment with tripods.

I took a few of my own with my little Point-and-shoot thingy that doesn’t like night time shots. But City Hall was so bright, they came out okay anyway. 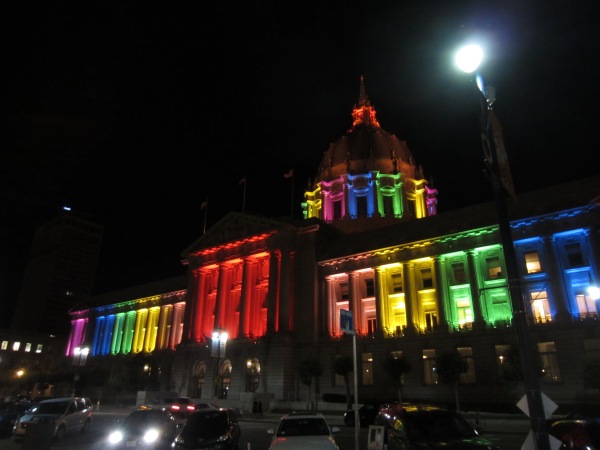 I remember reading, many years ago, a short story that had two gay guys married to each other. Then, it was science fiction. Now, it’s becoming real (again) in San Francisco. One of the marvelous ways in which we live in the future.