We’d gone for a walk to Pacifica Pier last month. It’s about 20 minutes from here, but feels like another world. When you walk all the way out and look down at the sea, it’s almost like being on a ship. 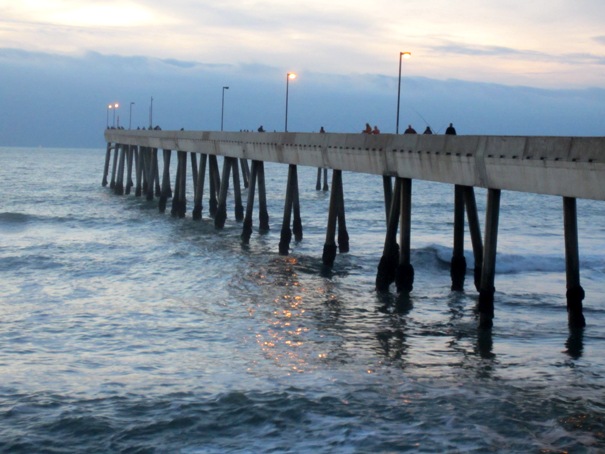 It was late in the afternoon, and the fishermen were beginning to think about leaving. Suddenly, a [brown] pelican descended on the railing, quite fearlessly looking around for handouts. 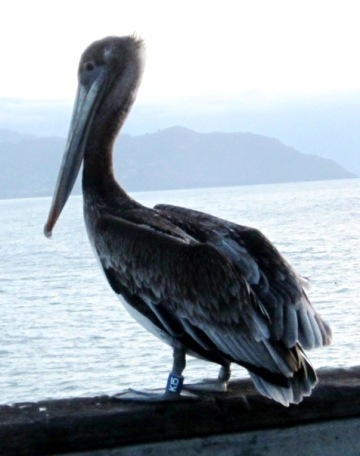 I took a few snaps, then realized it was banded. I moved in closer, and could see the band was prominently marked K15.

It apparently knew the drill. A couple of people gave it their bait fish as they left.

One fisherman told me, as he packed up his gear, that this particular bird was often here. He’d been told, he said, that it was a youngster, and born late in the season. Mortality rates were high for such late-hatched birds.

I wonder if that’s true, and also wonder who banded the bird. It’s clearly meant to be read from a distance.

(If anyone knows, comment here or email me? I tried posting on the SFBirds group of Yahoo, but they only permit San Francisco posts.)

As we were leaving, we saw a couple of wildlife rescue people armed with  net and a carry-box, rounding up an injured gull on the beach. I felt like cheering. (If you happen to read this, rescuers, thanks for your work!)

[Edited to Add: Later, I found out about International Bird Rescue. They have a form to report blue-banded birds on their website, so I did. Here’s what they wrote back.

K15 is one of our celebrities.  It hangs out at the Pacifica Pier a lot and unfortunately gets fed.  He has every ability to care for himself but he likes the snacks.   I am attaching some things for you and one is the poster for the banding project.  K15 is our poster bird.  K15 originally came into our rehabilitation clinic in Cordelia on June 23, 2011 with pouch lacerations and he was in a weakened state.   He was a first year bird and was rehabilitated and released on July 26, 2011 in Alameda.

K15 has been reported 10 times since his release.  It’s doing really well but I really hate people feeding it.  That makes them habituated and that always ends up bad for the bird.  Fingers crossed!

Thank you so much for reporting the bird.  I love your blog.

Thanks for the work you do!  (Here’s the poster – like the one below – as a PDF: BirdRescueBandedPelican)