I went to UCSF’s long range development plan (LRDP) meeting a couple of days ago. My main interest is in Mount Sutro’s Cloud Forest, but I also wanted to know what the other issues and plans were.

(For more on the Mount Sutro Cloud Forest, go HERE. The meeting report relevant to the forest is HERE.)

UCSF’s plan will be adopted in 2014, and runs to 2035. So they’re looking at issues around UCSF’s growth plans, its impact on neighborhoods, and how to reconcile one with the other. Their full presentation is HERE (as a PDF) on their website.

First, some background. Back in 1976, UCSF had a strategy of stealth acquisition. It quietly acquired a bunch of houses (mainly in the 4th Avenue and 5th Avenue area in the Inner Sunset), used some eminent domain, and planned to knock them down and expand. It was trashing the neighborhood, and the neighbors revolted.  The battle was bitterly fought, and went all the way up to Sacramento. 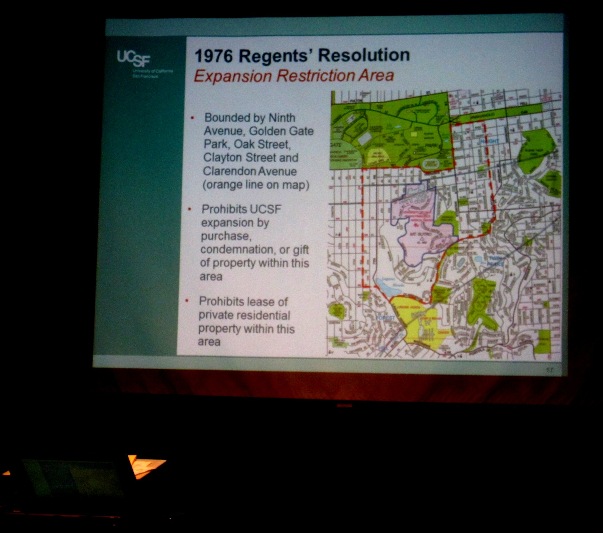 When the smoke had cleared away, UCSF agreed to limits to growth in the neighborhood.  The UC Regents passed a resolution. This had several important impacts on Forest Knolls.

WHERE ARE WE NOW?

UCSF seems to have satisfied conditions 1 and 3. The Sutro Forest is still a forest (for now, anyway). And as far as I know, they haven’t bought anything within the expansion restriction area.

The space ceiling is another story. By 1996, they’d blown through it and were at 3.66 mn sq ft. They planned to reduce the excess by half in the next period, by 2012. That didn’t work. Instead of reducing it, they went even further over the limit. They now have 3.84 mn sq ft, 8.2% over the limit.

So if you’re wondering why Parnassus Avenue seems increasingly crowded every time you go by there – now you know.

The Inner Sunset neighbors were most concerned about traffic and space ceilings. UCSF offered ways to reduce the square footage, the most important being to demolish University Hall. (The UCSF slides discussing those options are HERE as a PDF.)

They are also talking of how to plan for traffic, and for their shuttles. Though we in Forest Knolls aren’t directly affected, it certainly does impact us each time we go down 6th Avenue and through the Parnassus bottleneck.

If anyone wants to get involved, more meetings are planned. The UCSF LRDP website has the details.

3 thoughts on “UCSF and Forest Knolls”