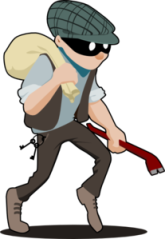 I’ve been following the Parks Station Police newsletter for some time now, just to know what’s going on – particularly in our neighborhood. Though the 15 June 2012 newsletter had nothing about Forest Knolls or Midtown Terrace (fortunately);  it was an interesting read.

We’ve just had a changing of the guard: Captain Feeney transferred out, and Captain Greg Corales has assumed command. Captain Corrales is making a push to clean up the Alvord Lake area, which has become the Drug-Dealer’s Mart. Captain Corrales himself was able to make two purchases there; and when he sent in his undercover people, they made three more.

He’s also the Editor-in-Chief of the newsletter. So is he the one responsible for the amazing alliteration appearing there?

What first caught my eye was the suspicious skulkers slinking sinisterly.

And then, another one who wasn’t just a suspicious subject, but an actual scoundrel!

Besides the slinking skulkers, our Parks Station Police Personnel have been confronting: truculent thugs who are mendacious miscreants, suspicious slumberers, remorseless reprobates, violent vandals, and booze banditos. To say nothing of  furtive fugitives…

Here’s a thank you to the Parks Station Police, not only for the essential and important work that they do, but also for the remarkable rousing reporting.