The San Francisco Forest Hill tree tour last Sunday, led by Mike Sullivan, had a great turnout. “I thought there’d be about ten or twelve,” said my companion. In fact, there were perhaps three times that number. The tour started at the Forest Hill club house, which is surrounded by big old Monterey cypress. It’s a strikingly pretty place;  the Bernard Maybeck architecture and the tall trees give it a medieval air.

Mike had autographed copies of his book available for sale; since I’d already got one and blogged about it, I passed. Otherwise, it’s an opportunity I’d have grabbed.

We moved on to a strawberry tree just up the road. It’s native to Southern Europe —  and surprisingly, southern Ireland. Mike explained that most likely, they had a wider range before, but climate change had pushed them southward. This was a common pattern: It explained the distribution of Monterey pine, in small pockets as far apart as the Monterey peninsula and San Luis Obispo. Trees changed their home ranges in response to changing climatic conditions.

The next tree we saw was one I’ve been planning to photograph for a Memorable Trees post. It’s a Monterey Pine that towers above a white Spanish-style house. The  house is handsome, but this tree is what makes it memorable. The tree has an almost manicured appearance. It’s been well-cared for and expertly pruned.

It’s almost impossible to think about memorable trees without considering the weird Araucarias, a age-old genus of living fossils that knew the dinosaurs. (Flowering plants didn’t. The dinosaurs lived in a world of horsetails and treefern — and araucaria.) They have wonderful names like bunya-bunya and monkey-puzzle and Norfolk Island Pine (though they’re not at all related to pines).

They come from the Southern Hemisphere, from places as distant as  New Zealand to Chile in a scattered  distribution.  Mike’s explanation was continental drift: these trees were around before the continents split up, and traveled with the land masses as they moved.  San Francisco has a number of them, of various kinds (including two of the Memorable Trees I posted about earlier).

Most of the trees we saw were on private property, and some of the neighbors came out and told us about their trees. The owner of an English beech that I’ve often admired said the big window opposite the tree brought it right into the house, so it felt as though their living room was part of the tree.

Elsewhere, someone invited us into his backyard to see a large buckeye, which was already bare – it shed its leaves as early as July – showing off the twisty branch structure. Mike told us that another buckeye is the subject of the only tree easement in the city — one that was saved from destruction when a builder bought the land on which it grows. Friends of the Urban Forest holds that easement.

Another neighbor told us about selecting sourwood trees – possibly the only ones in San Francisco – for the spot outside his home. Mike told us that the wood actually was sour, and jam could be made from the fruit. Later, we stopped to admire a rather large and twisted coastal live oak. 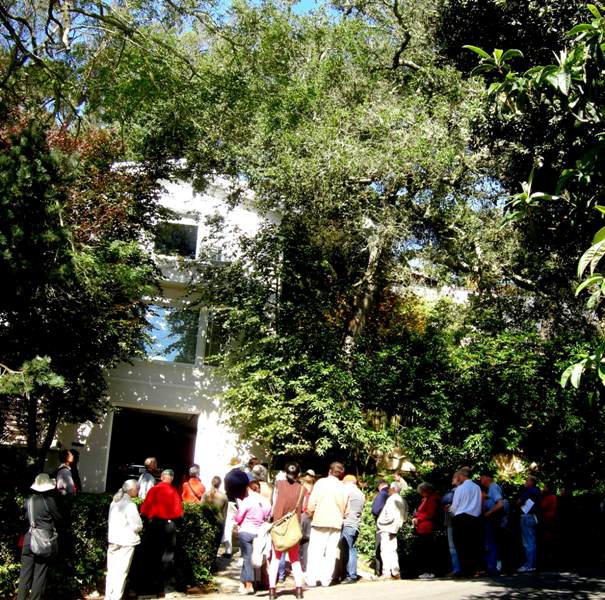 [Edited to Add: Forest Hill is proud of its trees; each one is tagged with a little metal accession number, and listed in a database. Someone explained that the neighborhood association cares for the trees; and will help a home-owner who wants to plant a tree to do so, free of charge. I have to say I was extremely impressed.]

One group of neighbors were trying to get support for a tree removal: A group of tall, stately, and possibly dangerous Monterey pines. They wanted to take down these trees, and replace them with smaller, younger ones.

WHAT NOT TO PLANT

One aspect of the tree tour didn’t appeal to me personally: Continual inputs about why various trees were bad. Invasive roots. Brittle wood. Dripping stamens and berries. Sensitivity to freezes. Pest vulnerabilities. (To be fair, most of these  comments did not actually come from Mike.)

I think I’d want to know all these things if I were actually trying to select a tree for a street (a process Mike noted was extremely site-specific, depending on the micro-climate, the underlying soil,  and the preferences of the owner).

But in the context of a tree-tour, a bit of a downer.

In addition to his book, The Trees of San Francisco, Mike maintains a website at www.sftrees.com — including a list (no pictures, unfortunately) of interesting street trees by neighborhood, as well as ‘Mystery trees’ he wants to identify. It also has occasional updates about the particular trees mentioned in the book.

FRIENDS OF THE URBAN FOREST

The tour, which was free, ended with an appeal for support for Friends of the Urban Forest. This marvelous group helps plant street trees all over San Francisco.