A marvelous feature of our neighborhood is that it’s so close to Golden Gate Park.

The park is full of wonders, from the carousel to the Japanese Garden to the museums and golf-course and windmill… but Stow Lake remains a favorite. (Not just with me – this neat essay talks about looking for microbes in Stow Lake water.)

Stow Lake is an artificial lake that feels natural. With the island of Strawberry Hill in the middle, and smaller islands where birds can safely nest, it’s become a bird and animal habitat. At the same time, it’s very accessible.  It’s paved all round, which means that even people who can’t safely walk trails can go around the lake. For those who want more, Strawberry Hill has trails encircling it and climbing it. And there are the boats, or at least, if you go early enough and are willing to pay the fees, there are boats. (Stow Lake access is free.) Parking is seldom a problem.

Being San Francisco, of course there’s a controversy: A historic boat house and snack stand on the edge of the lake may be turned into a cafe (this links to a PDF file from Rec and Parks, describing the project and asking for proposals from interested concessionaires.) Opponents  fighting to prevent a restaurant fear it will alter the historic character of the boat-house and destroy the peace of the area. I wonder if this latest iteration (dated 5 March 2010) which notes that Rec and Parks don’t want a restaurant with table-service (i.e., upscale) represents an acceptable compromise?

I was at the lake one evening, not long ago. It was too late for the boats, late enough that most people had left, except for a few joggers and dog-walkers.  The lake had ducks, coots, Canada geese, and seagulls, but most of them had called it a day. Even the herons in the nesting colony in the trees near the boathouse had settled down.

A rat ran through the undergrowth, and a few squirrels. This one glared at me from a redwood. They’re pretty unafraid, out at Stow Lake. They know we’re not going to eat them, and who knows, maybe we’ll feed them.

The birds were starting to look for places to roost, and I heard the soft, resonant hoot of a Great Horned Owl. Bats emerged in ones and twos, fluttering and swinging across the sky.

Finally the moon rose over the pines. Peaceful. 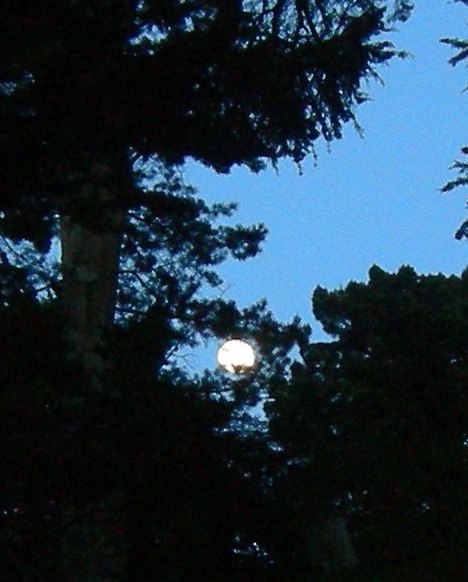